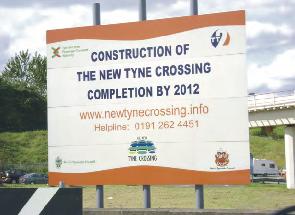 William Smith has recently supplied information signs for a major development project in the North-East for TT2 Limited.

The New Tyne Crossing is the project to construct a second vehicle tunnel under the River Tyne and to refurbish the existing vehicle tunnel, which was opened in 1967. It is a Private Public Partnership initiative and TT2 Limited, which was appointed in November 2007 as concessionaire to deliver the New Tyne Crossing, is responsible for part-financing, design and construction of the new tunnel and for the operation and maintenance of all the tunnels under the river, including the Grade II listed pedestrian and cycle tunnels.

"The New Tyne Crossing project involves construction of a 1.5km road tunnel under the River Tyne between East Howdon and Jarrow, the development of a major new road junction on the south approach to the tunnel, the introduction of new toll plazas on the north approach to the tunnel, and the full refurbishment of the existing vehicle tunnel," explains Trevor Jackson, Managing Director for TT2.

The four large signs supplied by William Smith are located at A19 Southbound and Northbound approaches to the Tyne Tunnel and on the North and South roundabouts.

"The signs are intended to provide the public with reference information about the project and have been installed in strategic positions close to the construction corridor, for maximum visibility to passers-by," says Mr. Jackson.

"William Smith was chosen to deliver this contract as they are a local company, employing local people, which meant that we were able to reduce the carbon footprint of the delivery distance. Furthermore, they have a good reputation and were able to demonstrate best value," says Senior Tunnels Controller, Paul Myers. "3M™ HIP reflective material was chosen for the sign faces for compliance with Highways Agency regulations."

"Using local suppliers is very important to TT" and also to the objectives of the New Tyne Crossing project. We want to maximise the benefits of the scheme to local people, and one of the ways we hope to achieve this is by using local suppliers wherever possible. However, we nonetheless require high standards of work and products, and would be looking for good quality service and best value from our suppliers, regardless of where they are located," adds Trevor Jackson. "We felt that William Smith was able to meet all of these expectations, with the added benefit of being locally based.

"William Smith was given a very short lead time, but we were kept informed at all times on the progress of the order and the goods were produced and delivered before deadline," concludes Paul Myers.

For further information call Wm Smith on 01833 694707 or visit www.williamsmith.co.uk