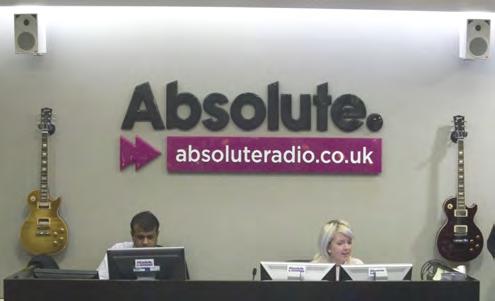 SignTrade Letters Ltd has provided the signage for Absolute Radio, the newly rebranded radio station that was formerly Virgin Radio. The company made two signs, one external and one internal - a two metre-long sign which adorns the glamorous reception of the radio station’s headquarters, in London’s Golden Square. Both were produced with only a three-day turnaround and the signs feature in the television commercials for the new station.

SignTrade Letters is a family firm based in north London. It fabricates signs as well as producing moulded and flat-cut lettering.

Operations Manager Daniel Oliver said: "We are thrilled to have been involved in the re-branding exercise for Absolute. SignTrade Letters is known for its ability to deliver high quality signage on time and to budget. For a prestigious operation such as Absolute, image is all-important and we are proud to have contributed in a small way to making the image sparkle."

SignTrade, a BSGA member, also produces moulded and flat-cut letters and can produce illuminated signs. All products are manufactured at its London factory.

For further information about all SignTrade Letters’ products and prices, visit the website www.signtrade.co.uk or call 0500 456700.