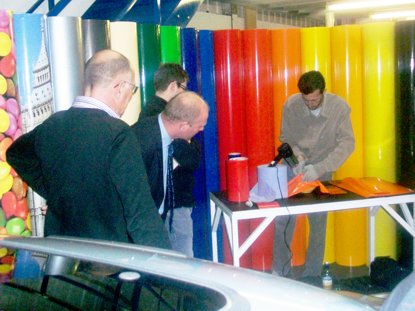 The main focus of the day was a demonstration of vehicle wrapping using not cast vinyl, but Intercoat’s new, extra-soft 60µm, 5-7 year, polymeric calendared vinyl - the 9600 Vehicle Wrap series.

The expected comments about polymeric calendared vinyl, such as "it won't stay in the recesses" were made. In reply, Steve Stachini, Proprietor from Signtraining.com used the 9600 to wrap the inside of a steeply concave bowl, which he then passed around. The result was impressive with no signs of stress in the vinyl apparent to the naked eye.

To demonstrate just how easy Intercoat’s 9600 Series is to use on a larger scale, Steve began wrapping a car on his own, with no assistance. While doing so, he said how he almost never uses a heat gun, except for major stressed areas, finishing and curing. 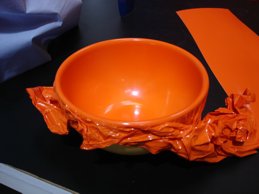 He explained that the incorrect use of a heat gun is a common mistake; initially the heat works, but within 24 hours the vinyl can pop out of the recesses. Steve said he applies everything dry and uses heat from a hair dryer only when needed.

Despite it not being a cast vinyl, Steve showed how he was able to scrunch up the 9600 Vehicle Wrap, which when heated returned to its normal shape and he continued wrapping with it. Intercoat says this is possible because the 9600 has a particularly flexible composition that does not show any memory effect.

Unusually, Steve prefers to use his naked hands rather than gloves when wrapping and allows his hands to touch the back of the vinyl, but pointed out that he knows people who cannot vehicle-wrap this way because of naturally oily or sweaty hands. 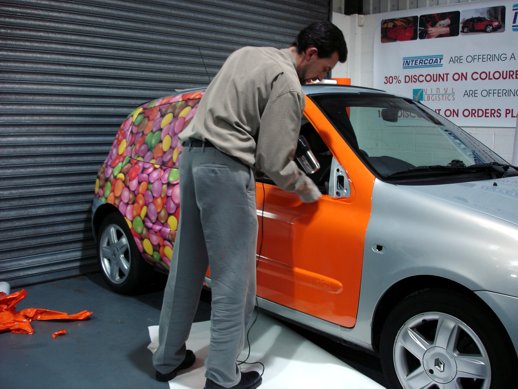 Another advantage in using Intercoat’s 9600 Series is that it doesn’t bubble. The mosaic structured channelling system in its adhesive means air disperses easily, enabling a hand to be used for large areas and there’s less need for a squeegee.

Another highlight at Vinyl Logistics’ open day was Simon Stanley, Managing Director from LSU and Rob Goleniowski, Sales Manager at Roland, who had set up a Roland VersaCAMM VP-300 for demonstration.

LSU is a distributor of an array of signage equipment and sign making supplies and when asked why they had chosen the VP-300, Simon replied: "This is one of the most versatile print and cut systems on the market, and a great entry level machine". He explained how Roland offers great support, adding: "The overall cost of ownership really is astoundingly low". 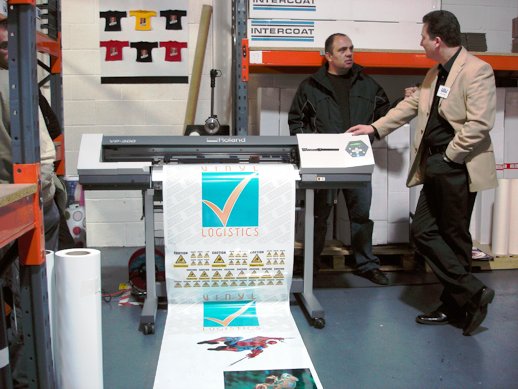 Bright Plate Ltd used materials from Vinyl Logistics to create a Bright Plate registration plate, tastefully lit up with white LEDs. John Openshaw, Director at Bright Plate, explained that in a huge market where people can spend a fortune on a registration number, the LEDs help Bright Plates stand out from the crowd.

To read Steve’s review of Intercoat’s 9600 Vehicle Wrap series, go to www.yachtwraps.net/pdf/int-9600.pdf and click on the bar bottom left of page.