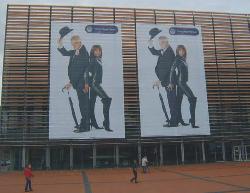 Pyramid Visuals, an innovative digital printing firm, was approached by Channel Five’s ‘The Gadget Show’ four years ago to undertake an experiment of vast proportions. Together, Pyramid and The Gadget Show compared the difference in picture quality of the traditional professional quality film camera and the up- to- the minute digital cameras, which were taking the market by storm. Now, four years on, digital camera technology was again put to the test with Pyramid Visuals’ state of the art super wide digital printers and expert team.

The Gadget Show presenters, Suzi and Jon, were photographed in a studio using both cameras. The film negatives and memory chip were then handed to Pyramid Visuals to produce the super scaled banner poster prints. The Pyramid graphics team transformed the film image into an electronic format using a drum scanner, to demonstrate the full capability of the traditional camera and get the best printing results possible.

The images from the two cameras were sent from the Apple Mac to the Rip Station where they were then scaled to their final 17 metre x 10 metre size and split into four separate files for each of the four colour processes: Cyan, Magenta, Yellow and Black (CMYK). 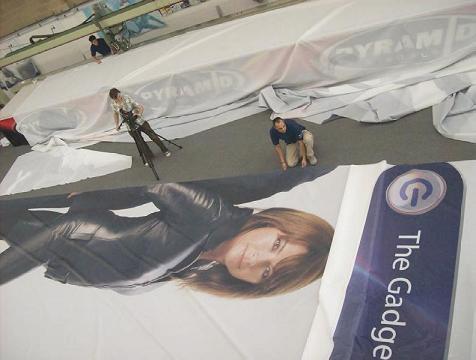 Once ripped the images were ready to print on the massive HP Scitex XL 5 metre super-wide digital print machine, built on the accomplishments of the market leading Scitex XL Jet, which has become synonymous with quality and productivity. This digital printer delivers an impressive output of 85 square metres of digital print per hour, which ensures its position as a leading super-wide format printer.

Pyramid selected fire retardant mesh material for this project, which is specially designed for large scale banners, building wraps and scaffolding covers. This type of printing has an 18 month warranty to resist against colour fading as a result of UV exposure, cracking, shrinking and tearing under normal conditions.

Using the market leading printers, it took just five hours to print the 340 square metre mesh posters. The rolls of print were then handed to the Pyramid Visuals specialist finishing team to weld the two parts of the posters together and re-enforce the edges with special webbing so that the large eyelets would carry the weight of 62kg super-size banner posters. The finishing was done on a 14 metre hot air Millerweld Master, one of the country’s largest and fastest PVC welders.

Pyramid Visuals offer the complete package from conceptual design, printing, producing and finishing to the final installation of the product. Once completed the qualified installation rigging team took the banners to Millennium Point in Birmingham where they installed the large poster prints using a cherry picker.

Due to the TV exposure Pyramid Visuals has picked up two new printing contracts. As a result we are now recruiting for a number of full time production positions. Please e-mail CV’s to scott@pyramiddigital.co.uk