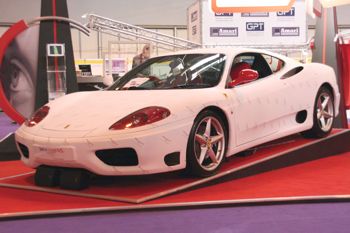 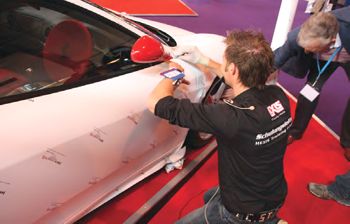 This series of multilayered 80µm high gloss cast pvc is specially designed for solid colour vehicle wraps. The product has been developed for application onto exotic sports cars, premium executive cars, all commercial vehicles where the owner requires a change of body colour or the application of eye catching graphics.

The HX20000 series uses the unique PE-coated liner with HEX’Press™ solvent acrylic adhesive technology, which facilitates the escape of trapped air, thus avoiding any air bubbles or creases during application. A further part of the specification is that the film can be cleanly and quickly removed at the end of the campaign.

Due to the thickness of the cast vinyl the colours are very stable during application; even after strong deformation the whitening effect is negligible. The HX20000 series is available in 33 high gloss colours, including metallic and lustre metallic. In order to create a matt finish vehicle wrap film Hexis recommends lamination with its PC30M2 matt cast laminate.

The HX20000 can also protect the bodywork and paintwork of the vehicle while it is covered in the vinyl film. The vehicle will be protected from the elements, minor stone chips, scratches, scuffs and insect damage. The HX20000 can even be polished during its life on the vehicle.

In order to support the launch of this product range, Hexis UK Ltd has an application guidance DVD on the art of applying HEX’Press vinyl film. They can also offer a range of training courses available from novice to expert in the application of the unique film range of HEX’Press. A full colour swatch of the HX20000 is available supported by an in depth and informative application guide.