Log in
Tweet
If ever proof were needed to confirm the long-term problem-free operation of the routing solutions provided by AXYZ International, then the experience of Ormond Aluminium in Gloucester would surely provide this unequivocally. For over 10 years, the company has been using an AXYZ 6014 router continuously in the fabrication of aluminium composite panels used to provide cladding, fascia panelling and cut out logos for large corporate end users. During that time, Ormond has never found it necessary to call on AXYZ maintenance personnel to repair even the slightest machine malfunction.

As Ormond Aluminium's effusive owner Owen O'Neill pointed out: "The AXYZ 6014 was installed in 1998 and, apart from a minor problem with the PC motherboard that was rectified at the time of installation, has continued to operate virtually non-stop without the smallest hint of any problem. The machine has been used primarily to cut and shape fascias, cladding and cut out logos in Reynobond and Reynolux aluminium composite materials (ACM) used by large corporate clients such as Shell and Sainsbury's. Around 90 per cent of our manufacturing output is reliant on the AXYZ router, a machining solution that has operated tirelessly for over 10 years using the original motors and one that has never required any replacement parts."

The AXYZ 6014 installed at Ormond Aluminium has a process length of 4,267mm and a process width of 2,095mm. With a negligible set up time, it can be configured to accommodate a host of machining options (including an Automatic Tool Change facility) and has the capacity for multiple routing heads to further increase its speed of production and performance capabilities. Often described as ‘routing engineering excellence at its best', the 6000 series has proved the ultimate solution for cutting large sheets of material with speed and precision. 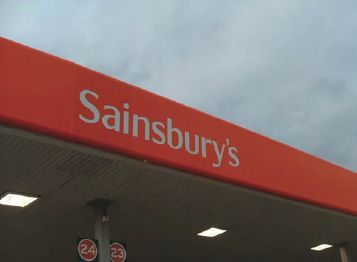 Established as a family-run concern in 1978, Ormond Aluminium commenced business manufacturing seamless guttering in aluminium. The company was subsequently approached by Shell to produce large fascias and panelling installed at its petrol forecourt stations and then by Sainsbury's to produce large cut out letters and fascias used in its numerous retail outlets. The supermarket giant remains Ormond Aluminium's largest customer and one for which it has recently embarked on a third re-imaging project. Three-millimetre Reynobond is used almost exclusively in all of the work undertaken and this is supplemented with two-millimetre pre-painted Reynolux for associated production requirements.

All of the CNC machinery installed at Ormond Aluminium, including not only the AXYZ router but also a guillotine, sheet bending and sandblasting machines and a bespoke mitre-cutting saw, has been geared to handle 4 x 2 sheets of material and configured to the company's own specifications. The AXYZ router was originally purchased to cut out logos and rout-and-return ACM panels for Sainsbury's and has since been employed for a diverse range of applications involving ACM. 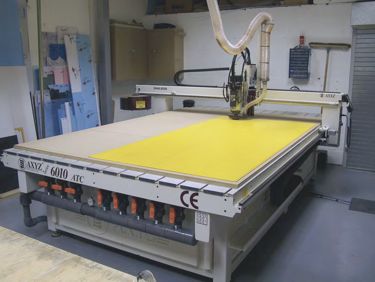 Due to the high performance capabilities and reliability of the AXYZ router, Owen O'Neill has never had to call out a maintenance engineer, although he is familiar with the excellent back up provided by AXYZ.

In conclusion, Owen stated: "People who have visited our factory and have seen at first hand the outstanding performance capabilities of the AXYZ router have often subsequently purchased the same or similar machine as a result. Although no machine upgrades are at present planned, I would not hesitate to again specify an AXYZ solution."

For further information on AXYZ routers, visit www.axyz.co.uk or telephone 01902 375600. For more information on the services provided by Ormond Aluminium, contact Owen O'Neill on 01452 423076.