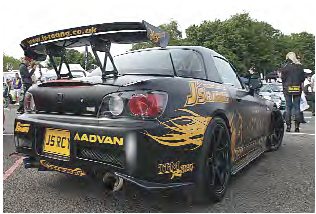 The range of vehicle wrapping solutions from diversified technology company 3M has been further extended with the introduction of the new Controltac Car Wrap Film Comply version 3 Adhesive Series 1080Cv3. The film has been designed for long-term use on private cars, vans, buses and commercial fleets and provides a host of new options with matt and 3D finishes, including black, white and anthracite carbon fibre, matt silver, black and military green and brushed aluminium, steel, blue steel, titanium and gold.

The film can be applied to flat surfaces and over simple or moderately compound curves. The multi-layer construction and grey, pigmented adhesive impart excellent opacity when covering high-contrast surfaces. Furthermore, due to the thicker construction of the film handling is made easier, purposeful removal simplified and protection for vehicle paintwork (including resistance to petrol spillage and the effects of harsh weather conditions) greatly enhanced without the need for printing or over laminating.

Controltac Car Wrap Film Comply version 3 Adhesive Series 1080Cv3 can be used to wrap an entire vehicle without seams. Alternatively, it can be used selectively on bonnets, roofs, boot lids, bumpers, door panels and exterior mirrors as well as for the creation of racing stripes and other markings. The special Controltac feature enables the film to be repositioned to ensure a perfect result at all times, while non-visible air release channels enable fast and bubble-free application. By comparison with expensive paint replacement systems, the film also saves time and money and sustains ownership and lifetime values of the vehicles to which it is applied.