Log in
Tweet
Vistech Technical Services (VTS) Ltd provides warranty packages for the Roland and Uniform range of printers and print and cut machines. The company also offers time and materials service for many brands of wide format machines, as well as refurbishing and selling second-user Roland and Uniform machines. VTS, established less than three years, has just moved to bigger premises in Poole, Dorset, so Martin and Roger Hinchliffe of Sign Update went along to find out the reasons for the company’s success in this tough economic climate. 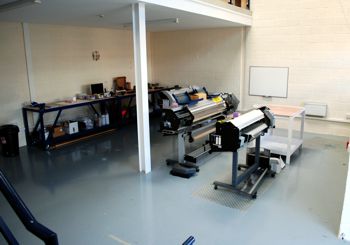 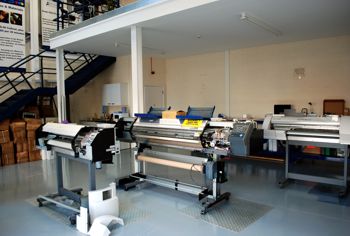 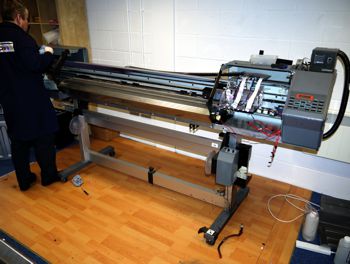 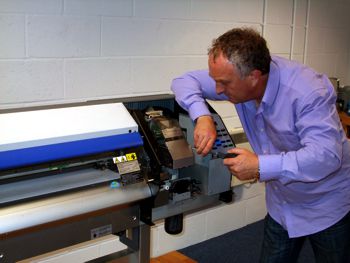 VTS Ltd is headed up by three Directors with considerable experience in the sign trade. Managing Director Peter Dawson, ex Service Engineer at Roland for 10 years, Technical Director Kevin Hills who is a third party ink specialist and formerly with B & P, and Sales Director Brian Peckham was the former General Manager of Roland DG. A team of hand-picked engineers with years of experience specifically on the company's chosen printer ranges provides a rapid response for customers throughout the country.

Two reasons for the growth that led to the move to new premises are the expertise at VTS and the quality of service it provides to customers. Prior to any printer being given a warranty, VTS undertakes a full service on the machine.

Peter explains: "We are the only company that services the printer at the start of the warranty. We spend 90 minutes to a couple of hours going over the machine, doing various checks and giving it a thorough service. By carrying out this initial service we prevent it from breaking down, rather than wait for it to go wrong and then responding as other warranty providers do. Our way means customers are less likely to have a hold up in production in the future and it also enables us to check for any parts that are wearing out."

The checks he refers to include the distance the motors have travelled in hours, and the number of dots the heads have shot. If the machine does require a replacement part, VTS customers also benefit in that where many companies insist the customer has to have a new part to get the warranty.VTS. If the print quality is acceptable, VTS will note that a part, or parts, have exceeded their life expectancy, and will only replace them when it affects the quality of the print. When the time comes to change a part, only the cost of that part is charged.

"In addition, as we only specialise in these two brands, Roland and Uniform, when our Engineers visit our customers they have virtually every part that's likely to be needed so achieve a first call fix. These are just some of the ways that we're offering customers the best possible service," says Brian.

As to the current economic climate, he believes it is bringing more customers to VTS.

"With the recession, many people are trying to keep their printers going rather than buying new machines," Brian says. "And they are saving even more money by choosing our warranty and service contracts. For example, customers going into their third year of warranty on a Roland VP-540 with VTS have saved about £2,400 compared to the extended warranties offered by the manufacturer."

But the lure of those shiny new printers are tempting. Brian spoke about a signmaker in Leicester who approached him for advice as to what machine he should buy now the lease on his VP-540 was coming to its end. It transpired that his current printer was doing everything the chap wanted and there were no problems so Brian suggested that rather than spend unnecessarily, the signmaker should opt for a VTS warranty and look forward to getting perhaps another 10 years out of his existing equipment.

"Printers nowadays are very expensive but in this throwaway society some people still want to replace machinery and get rid of the old. But they can be refurbished and still be excellent machines. With the right care and attention old machines can be brought back to virtually new," says Brian

Keeping your existing printer and extending its warranty or buying a refurbished machine seems very appealing from a finance point of view; but all the marketing by printer manufacturers says that technology is making vast improvements and machines are getting better and faster all the time, so what's the truth?

"There isn't that much difference with the new machines," says Brian. "They may be marginally quicker and improve some problems with banding, etc, but in reality a lot of large format printing is displayed from a distance. It really doesn't matter that it isn't perfect when viewed close up. The printers many signmakers have now are so good that any improvements can only be marginal. Pure print speed isn't really such a big issue for most people anyway, and that's something heavily promoted in the marketing of new machines."

The more the conversation continues, the more obvious it is that there is a real depth of knowledge at VTS. While acknowledging the need to keep costs down, there are limits to what can be done. Despite being able to buy refillable cartridges and third party inks to refill them, this isn't something VTS recommends.

"Buying a cartridge is far better, whatever ink you use," Kevin advised. "The cartridges are made in a clinical, dust-free atmosphere. Often signmakers are working in dusty environments and filling up ink cartridges using a funnel that may have been used for other inks, or may have a layer of dust on them, which is not a good practice. It only takes a single speck of dust to block an ink head, which has holes about a quarter of the width of a human hair. Many people refill cartridges to save money but it is a false economy. The heads tend to require more regular cleaning and we reckon that using a third party ink typically knocks off about 20 per cent off the life of the heads."

As to the future of print and possible alternatives, Peter believes there will be more and more thin films technology having an impact over the next five to 10 years. So, instead of applying printed films to a substrate, a thin film screen with a little wireless chip in the back will be used instead.

Whether he's correct or not, time will tell, but the team at VTS has certainly got it right now, judging by the 99 per cent of customers who extend their warranties year on year and enjoy discounts as a result.

Further details and prices are available at www.vts-service.co.uk or by telephoning 01395 442652.