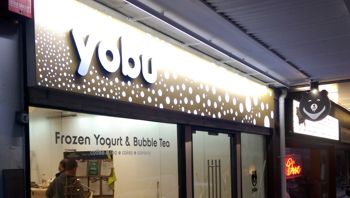 Award winning signmaker, Castleton Signs, who have been operating for more than 75 years, started out as a traditional signwriting company and have evolved into a full signage consultancy. They manage projects from their inception through to installation, including: surveys, strategy, audits, product design and specification, manufacturing and print. They won the prize for Illuminated Sign of the Year at the BSGA British Sign awards in 2014.

Their clients include major brands in the property, retail, leisure and services sectors both private and public. Much of their work is commissioned through sign specifies, such as designers and architects, shopfitters, main contractors and commercial interior specialists.

Rob Winterborn, Managing Director, feels strongly about what they can deliver: "When it comes to illuminating our signs we never compromise on the quality of the lighting system. Previous experience has taught us that although there are cheaper options on the market its nearly always a false economy."

For illuminating letters they use Orbis LED’s from Oshino which are what they used for their award winning Scottish Gas job. For this project they used over 500 Oshino F-LED 335 modules inside the letters to give a crisp bright, cool white illumination that the client was looking for.

These were powered from 4no. 200W transformers dividing the sign into approximately four equal sections; and allowed for any voltage drop from the long runs up to the roof where the solar power supply was sited. They collaborated with Scottish Gas regarding transferring the power from their solar panels (fitted to the roof of the building) to make sure there was enough constant power to the sign.

To enable the sign to illuminate “white” at night and “blue” in the day they applied 3M Colourvision vinyl to the face of the letters. The film was printed to match Scottish Gas corporate blue and matt laminated. The flame was to remain the same colour whether night or day so had a matt laminated print on translucent white to match the corporate flame guidelines.

"It is widely known that under the Minamata Convention the use of mercury will possibly be banned entirely by the year 2020, which could put an end to neon. With the resurgence in the 'retro' look of neon, alternative LED versions have to be found and they are becoming better and better as suppliers are looking to fill this market.

"Even when illuminating light boxes we would always guide our clients to use LED’s. Even they may still be a little more expensive than fluorescent lamps, the running cost and maintenance costs are much cheaper over time. We also used light sheets regularly when the depth of the sign needs to be kept to a minimum. The diffusion is excellent and it benefits from all the other qualities of LEDs. We feel LEDs are now the illumination method of choice."

There are challenges when it comes to sign lighting, comments Rob, mainly around managing customer expectations and getting an understanding of brightness and colours, for example warm white versus cool white. That along with getting the correct diffusion without any spotting so the illumination is constant rather than patchy.

Rob said: "With the massive range and high quality of LED’s available today, and with better experience we have attained by using them for some time, mean the rules are easier to follow to get the required results. The days of trial and error are now gone."