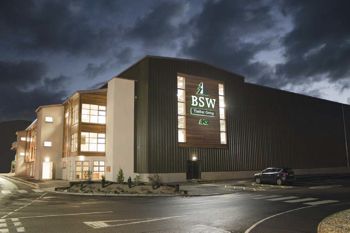 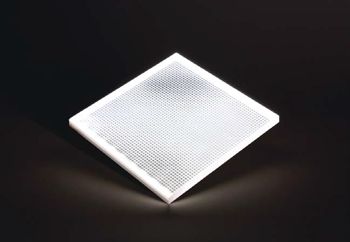 Applelec have created a patent protected LED Light Sheet, which they describe as having a slim profile and is easy to install. The LED Light Sheet has an etched grid, which transports light from embedded LEDs across the surface of the sheet to deliver "bright, even illumination".

It's versatile as can be used for a range of signs such as fascia signs; projecting signs; hanging signs; feature walls; and fabricated totems. The light sheet is made by the team in the UK, in their new anti-static assembly room in Bradford.

There are a variety of benefits using the light sheet for sign projects says Applelec, such as it reduces the sign profile, and material and labour costs. This is because traditionally lit signs, with fluorescent tubes or LED modules need a back tray to hold the components in place. So for when there is not much space or the client wants a slim profile, the Light Sheets look like a great option.

All Round Sounds chose this technology for their project creating signage for a sawmill in Fort William, Scotland.

Jamie Ball, project manager at All Round Signs, said: "Our client was keen to establish a strong corporate impression at their growing site in Fort William and we designed signage to be displayed on a large timber building facade. We chose Applelec’s LED lighting systems for the project as we wanted to add impact by using illumination but also create low maintenance signage due to the busy site location. As one of the largest projects we’ve been involved in, working with Applelec provided the support we needed to bring the project together, and ensured we were confident we could deliver."

The BSW logo was adapted slightly by All Round Signs to make sure it would be visually successful when illuminated against the natural wood cladding of the installation site. Making use of the timber background, the identity signage was created in several individual parts using fabrication styles appropriate to each element of the sign. A built-up rim and return style was chosen for the ‘BSW’ lettering whilst the tree logo and K2 sawmill site logo feature built-up flat faced construction styles. A fabricated sign tray with radius corners and a stencil cut face was used for the ‘Timber Group’ lettering.

Illumination to the stencil cut faces of the tree logo and fabricated sign tray was achieved using their LED Light Sheet, which was chosen for its ability to provide bright, even light. Green halo illumination came from Applelec's stocked SloanLED V-Series modules, which were selected for their five year warranty periods. Throughout the construction reverse fitted back trays were painted white to enhance the halo illumination with all LEDs fully wired-up and bench tested by Applelec.

Sam Armstrong, Applelec sales director, said: ‘We are extremely pleased this project has been such a success for All Round Signs. They have shown creativity in adapting their client’s logo to make sure it would be suitable for its intended location and worked towards future-proofing the installation by choosing LEDs with three and five year warranty periods. Their focus on the longevity of their customer’s purchase sets them apart and shows they are a company with the very best interests of their customers at heart.