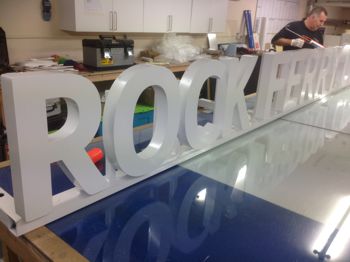 Mark Ashcroft, Managing Director of TRADE-LETTERS.COM, notes that as the popularity of built up lettering has increased, the market has seen a number of new methods of lettering production.

One such method is the use of computerized bending machinery to make letters, as opposed to fabricating the letters by hand after they have been cut on a water jet machine. While there are some perks to this method, such as cost-efficiency, Mark notes that machines cannot always return the same quality results as handcrafted lettering. “We have made some lettering that a machine could never really handle,” he says. “In fact, I believe machines would struggle with anything that is not square cornered, and would have a difficult time with anything that wasn’t in a Sans Serif font.”

For sign makers on a budget, machine manufactured letters may be a slightly cheaper option, but for Mark, the focus lies on a quality finished product. His team of quality time served craftsmen create built up lettering made from polished, brushed and descaled stainless steel, the latter of which is used so they can powder coat or wet spray the lettering to a client defined colour. “It is not that we are against progress, if we thought the bending machines were any good we would purchase one tomorrow, maybe even two with the volume of work we have at present. But we have spent time reviewing them and we are happy with our current traditional methods of production, as from my point of view quality of the finished product is paramount.”

Another major improvement Mark has noticed over the last 5 years from a cost efficiency angle has been the introduction of LED lighting modules. “I just think LED’s have transformed illuminated built up letters, it has basically killed our neon department, but made the job so much easier and cost effective” he says. “There are new products all the time, the hot one at present looking at how some of our competitors seem to be marketing appears to be the LED light sheet, although it is more frequently used for other signage applications and not as much in built up lettering.”

For Mark, the focus remains on the customer, and listening to client feedback above all else. “As a company we do not try and lead the way in selling these new concepts, as we are client driven, and our clients haven’t asked us for them. We tend to concentrate on our core principal of letter making as we have for the last 60 years.”