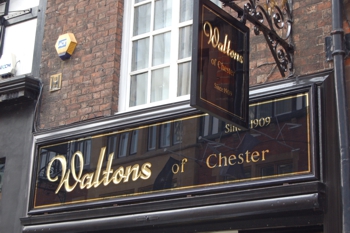 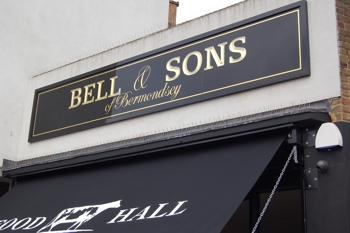 Traditionally a trained coach painter, Martyn Vimart founded Vimart Signwriting in 1978 to cope with the workload and provide clients with the original vehicle livery.

His offerings extended into canal boats and eventually general signage, which he still offers today. “Personally, still I’m very busy,” he says. “I’ve been working in the industry for over 40 years, and I still receive a number of requests for heritage vehicles, pin striping on motorbikes and similar jobs.”

Martyn’s techniques include traditional gold leaf work (“very popular with high-end establishments in London”), lettering, heraldry, and scumbling. The latter he carries out alongside partner Sally, who paints narrow boats. With this technique, paint is applied over existing paint, enabling the layer below to show through what is almost a speckled effect. Signwriting on narrow boats is one of the key areas in which Martyn finds business, along with restaurants and large retailers such as J Crew.

Martyn is among many signwriters who are of the belief that the eradication of lead in the paints makes the hand-painted art better for the environment than digital signage, for example. “I believe that traditional signwriting itself is a lot greener, as when digital material is used, it cannot be recycled. Even if you do a small sign, let’s say on a door for example, you use materials that will ultimately end up in landfill. We only use a very small amount of paint, and it tends to have to be an oil-based paint as it lasts longer. With paint, you’re not replacing signage on a regular basis, which reduces wastage.”

Picking up the right paint

Martyn’s paint of choice is 1Shot, an American product. There are primarily two types of signwriting enamels available today, gloss and matt. “Lead used to provide good flow coverage and good density to the paint, which of course you don’t get now. But because you’re using enamel, you don’t need to put a lacquer over the top, which saves time,” says Martyn. In terms of styles or emerging “trends” in the sector, he has noticed that there’s been an uptick in end-users asking for satin finishes. “This seems to be a modern trend, and we’ve done a number of signs like this recently, and have another one to do in Marble Arch shortly.”

In addition to carrying out a wide variety of work, which includes everything from the odd village sign to completing the Emma Bridgewater factory signs, Martyn also teaches courses as well. He also has an apprentice, but mourns the lack of similar apprenticeships elsewhere in the industry.

“There’s just not much out there for traditional signwriting at the moment. For now I just have my own apprentice who has just finished Art College. It’s no longer really recognized by the government as a trade, which is a real shame.”

Martyn plans to put his own apprenticeship scheme in place in the near future in a bid to combat waning support and opportunities, and keep the traditional signwriting sector alive.