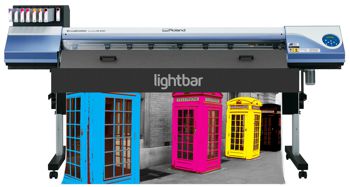 Capitalising on a year's worth of success with its Lightbar technology, Colorific announces the launch of its first wide-format print-and-cut machine, the UV640PC. The 1.6m (64″) printer combines the benefits of solvent and UV-curable chemistries to provide a 'viable, cost-effective alternative' to latex while offering the 'photo-realistic print quality critical to many applications at this market level'.

Based on a Roland VS640i chassis, Colorific's UV Light inks are the 'star' turn in this new engine, which offers the vivid colours expected from solvent with the resistance and durability associated with UV-curable options. Outgassing is eliminated and shrinkage non-existent, meaning that output is immediately dry and ready for application.The production cost for a square metre of print using Colorific's SUV formula is dramatically reduced, according to the company.

Combined with the reality of same-day turnaround capability, the UV640PC incorporates Epson's latest print-head technology, the DX7, giving users resolutions reaching up to 1,440dpi in high-quality mode. Production mode allows for 21sq m/hour, so banners and billboard are ready to hang the minute they come off the printer.

For those producing high-margin cut applications, such as stickers, decals and vehicle markings, Colorific's UV640PC 'simplifies the process'. While solvent and eco-solvent engines are likely to produce media with a noticeable shrinkage of two to three millimetres, SUV output is less than one millimetre and is in line with natural post-production media shrinkage.

"Solvent, eco-solvent and latex have been a mainstay for wide-format houses producing print-and-cut applications, but none is really the perfect solution," explains Shaun Holdom, business development director at Colorific. "The UV640PC addresses their conventional disadvantages and turns them into major positives. We're confident that the extension of Lightbar into print-and-cut will offer phenomenal advantages, and we look forward to taking the UV640PC on tour this year."