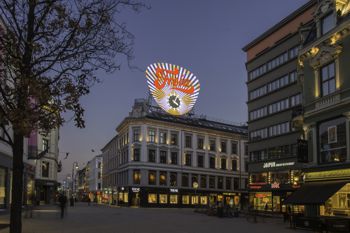 Further enhancements have been made to the Chiplite LED module, CL-XI and it's new brand names is CL-XOL. It will be formally launched at European Sign Expo to be held in conjunction with FESPA Digital 2014 in Munich at the end of May.

Further optical improvement at no additional cost to users enables a 160-degree light distribution capability to be achieved with the upgraded CL-XOL module. It is now possible to illuminate a square-metre 220mm-deep flexible-face light box using only 16 CL-XOL H3 modules via a grid of 250 x 250mm.

The upgraded system incorporates two SMD LED modules that are constant-current driven and soldered to form a chain of 40 modules. The CL-XOL also carries the CE/EN 55015 seal of approval and is RoHS-certified. It also incorporates an IP65-rated transparent housing for optimum safety and reliability. Of special interest to sign makers is the system's ability to accommodate difficult-to-fit corner or serif requirements due to the special optics that provide an extra-wide 160-degree angle of radiation. This enables the CL-XOL to be used in light boxes and for the illumination of sign lettering with a very low depth (typically as small as 30mm).

The CL-EI system has been developed specifically for illuminating double-sided light boxes. These can be illuminated via the grid without the need to illuminate both sides of the light box. Due to its compact size, the system can also be used in double-sided circular banners. Available as a soldered chain of 30 modules, the light intensity of the CL-EI system can be varied by either pushing the modules together or pulling them apart.