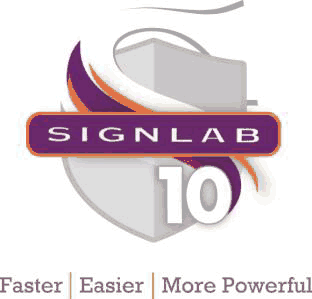 The latest version of the world’s most widely used sign making, large format display software product will be available from the end of April 2016. SignLab version 10 was first previewed in early March at FESPA 2016 in Amsterdam, and was officially launched at both the ISA Sign Expo in Orlando as well as Sign and Digital UK in Birmingham, UK in mid-April.

“The response that we have had from our reseller channel as well as end-users who have seen the preview to this release has been outstanding,” says Michael Chramtchenko, CADlink Director of Marketing. “We believe that the terrific feedback we have encountered is a direct result of our commitment to involving all of our stakeholders, end
users, resellers and manufacturing partners, throughout the development process. Having SignLab v10 includes the new features that provide the most impact in the day to day running of their businesses.”

Already seen as the "industry standard" in sign making software, SignLab v10 includes a new series of design and production workflow tools. The integration of these tools and CADlink’s expertise in driving a wide variety of output devices, such as printers, cutters and engravers, provides a "complete software solution that cannot be found in
any desktop publishing or other sign making software packages on the market today".

For detailed information, including access to a free online trial version of SignLab v10, visit www.cadlink.com or phone 800-545-958.