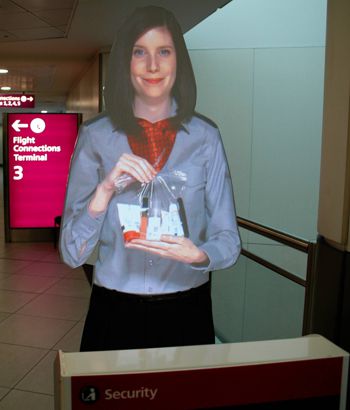 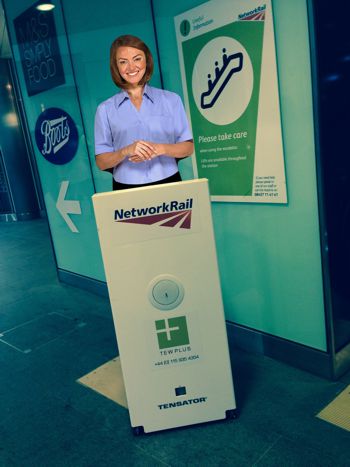 Tensator passenger journey management has installed two of its Virtual Assistants in Heathrow's Terminal 4 as part of the airport's check in and security process.

The Tensator Virtual Assistant (VA) uses cutting-edge technology to project an image and create the illusion of a real person. Fully customisable, it brings messages to life and helps to engage passengers with consistent and clear communications.

'Louise', who wears a full Heathrow security uniform, is situated at check-in and security and informs passengers about acceptable liquids and other security processes.
Heathrow bought the VAs following a six-month trial, which showed a reduction in bag rejections, meaning fewer delays through the security process.

Colin Sherwood, airport specialist at Tensator said: "Bags were being rejected at search areas because of non-compliant liquids. The VA helps make passengers aware of what they can take through security. Faster through-times at check-in means less stress for passengers who can now progress to duty-free and relax at the beginning of their journey."

A number of major airports, both in the UK and abroad, have adopted Tensator Virtual Assistant technology to convey compliance messages to passengers and Heathrow is now considering adding two more in 2014.

'Louise', at the foot of the escalator and close to the lift, delivers her directional/safety messages whenever she detects movement in the immediate area.

Heathrow bought one Tensator VA Premium for the security area, and one VA Ultra which is  situated at check-in.
The VA Premium is a next generation digital signage solution designed to enhance both the passenger experience and the company brand. Features include a proximity sensor to ensure timely message delivery and up to 20 hours non-stop operation time.

With a footprint of just 50cm x 50cm, the Ultra can be easily moved to almost any position within the check-in area.  Its flexibility also means it can be utilised in other areas of the airport terminal such as security areas, aisles or end caps in retail units. This creates a flexible point of difference for conveying important security messages; dealing with frequently asked questions from passengers; and helping airport shops to promote special offers and product information in an innovative way.

Colin added: "We're thrilled that the VA has managed to assist in the security process at Heathrow and help passengers to really engage with the all important security message."

There is also one at King's Cross Station in London, who advises travellers with heavy, awkward to handle baggage to use the lift rather than risk the escalator. Tensator worked alongside telecommunications and security systems integrator TEW Plus Ltd to supply, configure and install the unit which, during a six-week trial, has seen a large increase in passengers using the lift.

Ajay Joshi, head of media and technology at Tensator said: "Existing signage was being ignored and the safety of escalator users was of great concern. We worked in collaboration with TEW Plus and Network Rail in the strategic design of the Virtual Assistant to both improve safety on escalators and promote the use of the lifts for heavier baggage. It's obvious by such a massive increase in passengers using the lift that the Virtual Assistant's instructions are being clearly understood and carried out as planned."