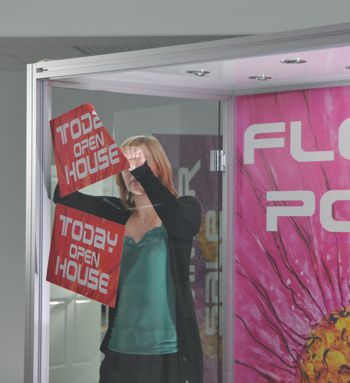 Due to the ever-increasing popularity of windows as a short term promotional medium, a new double-sided, clear polyester has been added to the range of printable films available from Seal Graphics.

Called, Print Mount Window, the film has been developed from 23 micron polyester which is dimensionally stable and therefore unlikely to shrink as PVC window films often do. Seal say it will deliver bubble-free applications on glass and clear plastics and can be fixed in place by hand quickly and easily using nothing more than a simple squeegee.

One side is coated with a permanent adhesive while the other has a residue-free, peelable polyacrylate emulsion. The print-carrying, permanent side is protected by a siliconised release paper; while the other (window side) has an embossed 110 micron LDPE film.

Seal goes on to say that Print Mount Window is suitable for removable window displays likely to remain in use for up to three months and that it will not degrade in clarity or become brittle during that lifetime.

"Customers are requesting ever simpler methods of getting their advertising message across and Print Mount Window fits the bill perfectly," said Andrew East, Seal's Regional Sales Manager for the UK & Ireland.

To obtain your free sample call 01268 722 400 or for more information go to sealgraphics.com