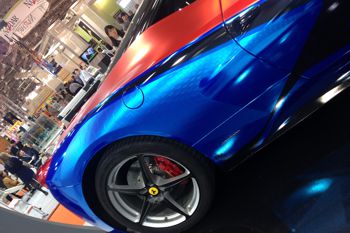 Record numbers turned out to the APA stand at FESPA 2015, according to the company. It was an "outstanding success" for the Italian adhesive film producer, which presented the new APAWrapFilm series for the first time. From the "splendid" colours of the new Candy Color line, with intense and ultra-shiny metallic finish. To the latest Chrome variations and the APA Truck film ranges, unique and original cast film for quick and easy customisation of trailer and lorry covers.

FESPA was also a chance to exhibit the entire APA range of adhesive film, with special Air Free System technology, which facilitates the escape of air during application. And the Wall and Solar&Safety lines, are described as cutting-edge solutions for the interior design sector, which allow decoration of the most diverse range of objects and surfaces.

The star of the show, says the company, was a spectacular Ferrari 458 Italia, wrapped by "giants" of the car wrapping world, MetroWrapz and Prowrap, with the new Chrome effects. Directly from Miami and Holland, the two wrapping legends brought together in Milan by APA did an excellent job of decorating the car at a unique, one-off event. It was immortalised on video and projected onto the big screen at the APA stand in a global preview for the Cologne public.

The work of the APA wrappers at FESPA attracted the curious gaze of a large number of visitors, who were able to touch the latest products first-hand and see live demonstrations of how to "tastefully reinterpret the design of a car or any other object in just a short time and with surprising results".