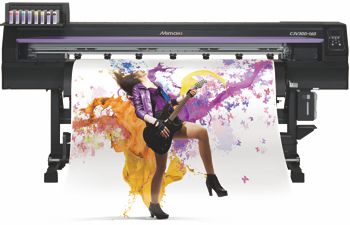 Mimaki recently launched the CJV300 series, their new print and cut flagship that is the first of a series of unveilings as it exhibits at shows throughout the autumn. The CJV300 had its European premiere at Viscom Paris 2014 in September on the stand with other Mimaki products.

The CJV300 is an integrated print and cut machine, available in 1.3 and 1.6m widths, to give simultaneous printing and cutting operations with 'best-in-class' print speeds of up to 105.9m² per hour. Its two newly developed staggered print-heads deliver high-resolution printing whilst continuous registration mark detection enables the uninterrupted cutting of an entire roll of media. The registration marks produced on the CJV300 are zero-margin, reducing costly media consumption.

"The high speed of the new Mimaki CJV300 is going to set a precedent for integrated printer/cutters," says John de la Roche, national sales manager – sign & graphics for Mimaki's UK and Irish distributor, Hybrid Services. "It's an exciting time for Mimaki customers and the CJV300 will give the ultimate print and cut solution for producing items such as stickers and labels."

Coinciding with the launch of the CJV300 comes news of the availability of the SS21 silver ink. Mike Horsten, General Manager Marketing EMEA for Mimaki Europe said: "We are especially excited to be offering a new silver ink along with a brand-new printer to bring high value-added printing to manufacturers in the sticker, labelling, and packaging print industries. This complements the SS21 Orange and Light Black inks introduced earlier this year and makes it possible for users to create metallic images in no less than 648 different colours with a silver underlay."

The SS21 silver ink brightness is 1.67 times greater than that of conventional silver inks, for 'stunning' mirror effect results. Compatible with all printers using SS21 inks, the new solvent silver ink will give print companies the opportunity to 'greatly add value to their output and print dazzling finishes'.