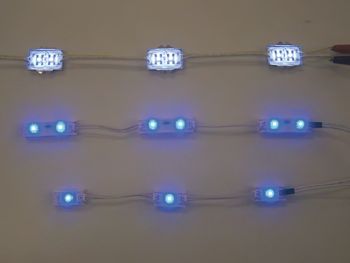 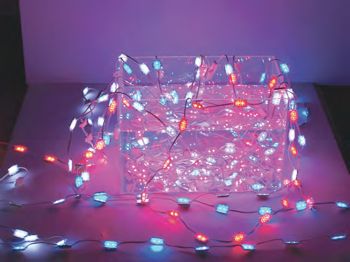 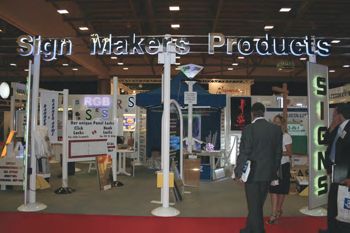 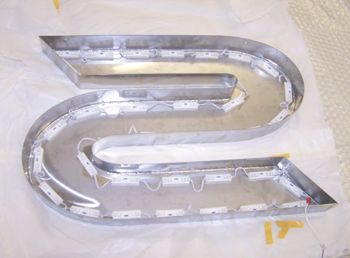 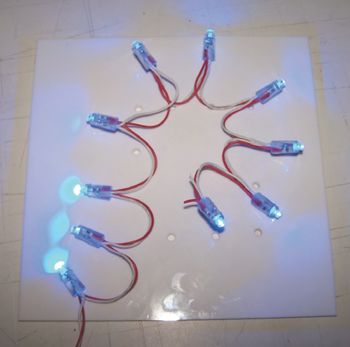 With the growing popularity of using LEDs in signs, letters and trough lights, the team at S.M.P. has been hard at work developing exactly what signmakers require from LEDs.

Many companies supply LEDs in a chain and these are, of course, on pre-determined centres. Anyone who has used these will be aware of the inherent problem, namely that they are spaced too far apart. This spacing is not by accident; equally, says S.M.P., the spacing is not so as to stretch out the span per metre of LEDs to make them more cost effective. For this reason S.M.P. prices its products by the module, giving signmakers total control over the costing of their projects.

The extra spacing in chains is to help with the layout of LEDs in letters. Not all letters are as simple as an "L" to plan out, anyone who has laid LEDs in letters knows that the connecting leads need to be extended and shortened to suit other letters such as "A" or "R". Therefore, selected LEDs in S.M.P.'s waterproof ranges have pre-determined leads in excess of the required lengths.

For added flexibility S.M.P. has also developed a plug-together range of LEDs, which offers several advantages over pre-determined ranges. A major benefit is different length connecting leads, which can be selected to suit each connection. The LEDs can also be mixed and matched to suit. Modules with one, two, or three diodes can be plugged together for different applications. In addition, colours can be mixed; red, white, blue amber and green can all be used to create magical effects.

The company's Flexi-strip 180+ range of LEDs is designed for face illuminating built-up letters and anything with forward facing light requirements. Flexi-strip 180+ is so flexible that a 310mm strip can be tied in a knot. Again, S.M.P. developed this product as plug together with the added advantage of 100mm and 50mm long strips also available, thereby avoiding the necessity of cutting and subsequent wastage as is the case with many other strips.

The 180+ in the name refers to the angle of light that can be achieved and helps eliminate dull spots in the sides of acrylic built-up letters. Diodes can be teased out to cast the light exactly where required. Flexi-strip 180+ is available now in 310mm lengths with 100mm and 50mm strips to be introduced soon.

S.M.P.'s Spotters range of LEDs enables the signmaker to pre-drill a panel to form words / logos or to highlight a subject, then just push the LEDs through from the back. Supplied from stock in chains of 50, in red, white, blue, amber and green, these are particularly quick and easy to install.

S.M.P. believes its range of RGB LEDs is second to none. Available as 3, 6 or 9 diode modules, they plug together and can be mixed and matched to suit individual applications. These units are so versatile that S.M.P. has often fitted them into moulded letters just 150mm high.

Two ranges of waterproof LEDs are offered. The miniwaterproof range, rated to IP66, has gained the approval of a multi-chain high street name and is available in chains of 20 or 30, in red, white and blue.

The second waterproof range is to IP68. Tested to one metre depth of water pressure, they are perfect for swimming pools.

To complement its LEDs S.M.P. supplies controllers and has a versatile selection of moving message time and date machines plus and a good choice of rotating signs. Visit the website www.signmakersproducts.com to see animated LEDs at work and for further information. 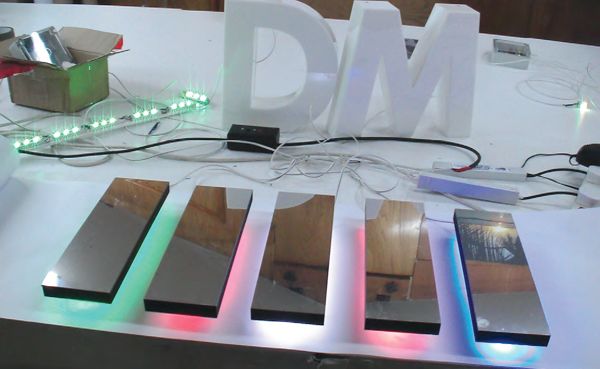