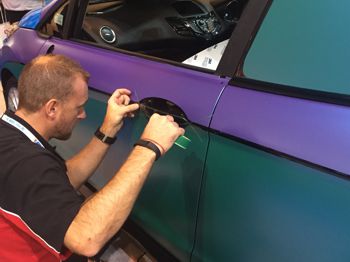 3M is launching a range of knifeless tapes that incorporate patented technology, which uses a filament embedded in the centre of the tape for cutting adhesive films, after they acquired Knifeless Tech Systems. The film is placed over the knifeless tape and cutting is achieved by pulling the filament up through the film. The tapes are both flexible and blade-free, which allow installers to quickly cut graphic film, along the contours of the surface, with precision and without risk of damaging the film surface.

Classic series
It easily follows the contours and curves of any vehicle and is ideal for new knifeless installers. 3M Bridge Line Knifeless Tape creates evenly cut graphics bridging from one panel to the next for a professional finish. It is used to create uniform cuts in wide gaps between doors, bumpers and rubber mouldings.

Design series
The tape is engineered to create highly contoured designs with sharp, clean edges, and is ideal for creating stripes and accents. 3M Tri-Line Knifeless Tape is a unique triple-lined tape that ensures an accurate, consistent stripe width from one end of the car to the other and is ideal for pinstripes, gaps and butt seams.

All 3M Knifeless Tapes are supplied in re-sealable, single roll pouches for easy storage and to prevent tape damage from dust and dirt.

Training is vital to the success of any film installation, and that applies to the new 3M Knifeless Tapes, which have been added to the 3M Endorsed Training Programme.