Log in
Tweet
Flags manufactured by a south coast firm have played an important part in a record-breaking expedition to the Arctic by environmentalist and explorer Lewis Gordon Pugh.

The mission to the North Pole saw Lewis kayak 135 kilometres through Arctic ice packs to 81 degrees north, where he planted 192 flags donated by the Hampshire Flag Company representing each of the countries in the United Nations. This is a historic event as it is the first time all the flags of the world have been planted near the North Pole.

Lewis is now the only person to have kayaked this far north in a daring journey during which he faced freezing conditions, horizontal snow showers, strong sea currents and an ongoing threat of polar bears and walrus.

Lewis said, "Last year at this latitude I stood on three-metre thick ice. This year the ice I was standing on was only one-metre thick. The disappearance of this sea ice is happening considerably faster than scientific models predicted a year ago.

"By planting flags the world’s 192 nations on the Arctic, I hope I have conveyed that despite it being thousands of miles away from most people, the loss of its sea ice will have profound consequences for us all," added Lewis.

This is the largest ever order of individual national flags that Waterlooville-based Hampshire Flag has manufactured and the family-run firm provides ongoing support for Lewis’ record-breaking swims and expeditions. In 2007, Lewis swam one kilometre across an open patch of sea at the North Pole to raise awareness of the Arctic's fragile state.

Graham Wilkinson, Managing Director of Hampshire Flag, said "We are delighted that Lewis has safely accomplished his mission and succeeded in raising international awareness of this critical problem.

"It is wonderful that our flags have travelled so far and through such adverse conditions, and seeing so many of them planted on the ice really highlights that this is a global issue" added Graham.

The award-winning company provides on-going backing for various charity challenges and expeditions including the Homeless World Cup, Portsmouth Festivities and Keith White’s expedition to sail solo across the Atlantic with only one hand. Prestigious clients include Portsmouth Football Club, BBC, Channel 4, IBM and British Airways and it also has a sales office in Dundee, Scotland. 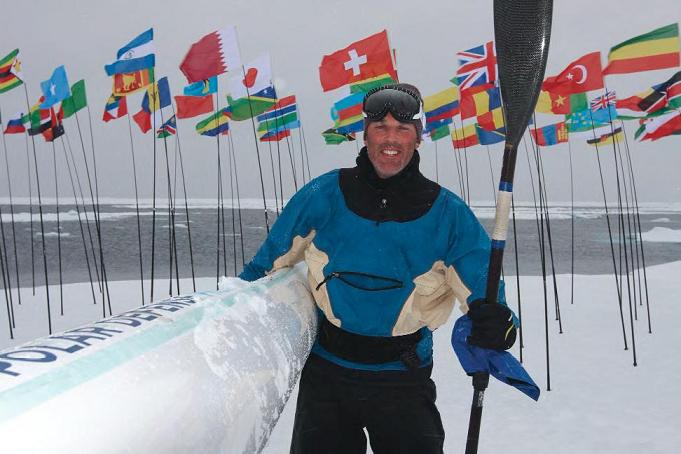