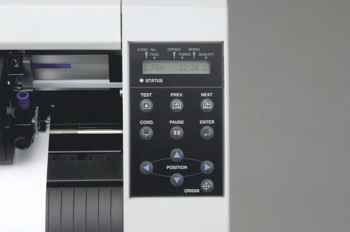 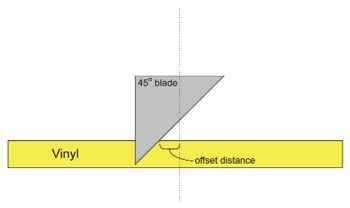 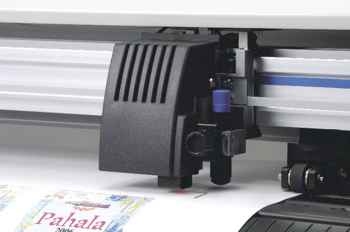 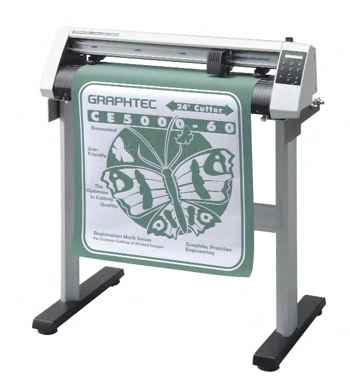 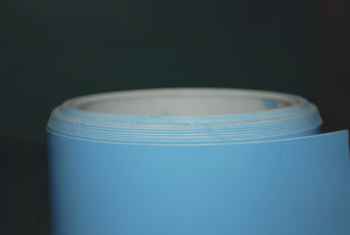 It's been about 20 years since I last used a vinyl cutter, and that was only a few times, back when I was a teenager helping my dad, Roger Hinchliffe who was a traditional sign writer before he started Sign Update. Things were very different then so effectively I'm new to practical sign making.

When the new Graphtec CE5000 cutter was delivered, an engineer came round and got me started with a brief introduction. I was shown how the different settings apply and received some basic tips including a good explanation about the importance of the offset setting. An incorrect offset setting means less accurate corners and more difficult weeding. I haven't had to re-adjust the offset yet as the variety of vinyl I've used to date has been limited; but at least I was made aware of it, so when I do use a different degree blade or thicker vinyl, I'll know what to do. While the engineer was there we did a few test cuts with the offset at different settings so that I could recognise when it is set incorrectly. Because the centre of the blade is not where the cut is usually made, the machine has to send the centre of the blade past the point to be cut, by an amount that relates to the offset (see diagram left); otherwise the blade will cut past or not up to the point it is supposed to and therefore the cut lines either don't meet or they overlap, and weeding the vinyl becomes difficult.

The two images below show the corners becoming rounded off when an incorrect offset has been used to cut a 1cm square of vinyl. The vinyl should have been cut to a perfect square with the triangle inside it as the third image shows. 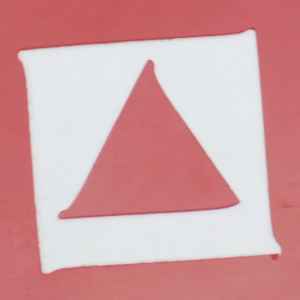 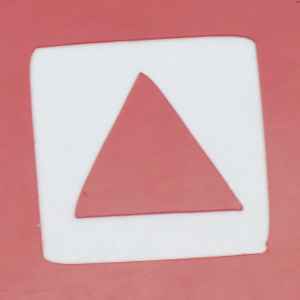 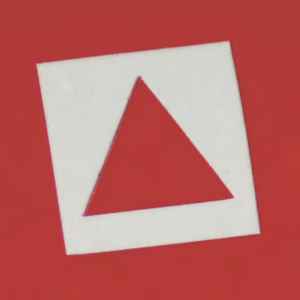 I had two problems only when using the Graphtec CE5000 and neither of these were to do with the machine itself. The first was to do with accurate cutting over long lengths. The tracking of this machine is so good that whenever there was a problem, it was always down to me. Either I was using vinyl wound too loosely on the roll or I hadn't lined up the roll correctly on the machine, although this should have been simple with the guidelines that the CE5000 has.

One weekend when I was happily cutting away on a job to be completed by that Monday, the Cutting Master 2 plugin just stopped working suddenly, for no apparent reason. Initially I had a panic about the Monday deadline and because I didn't know what to do or who to contact. But one of the great things with such a popular product is that there is a large community of users on various internet forums. I quickly discovered someone who had experienced the same problem and found out that it was probably because I had installed one of the CorelDraw service packs. They'd been advised to just upgrade the Cutting Master 2 plugin, which is exactly what I did. Everything started working again and I got the job completed on time.

I also tested out the Automatic Registration Mark system on the CE5000. This is Graphtec's proprietary ARMS 4.0, which utilises four registration points rather than the usual three and is marketed as a big selling point on the company's cutters. I tested it by using a laser printer to print a logo with registration marks on to ordinary office paper and then put the paper through the Graphtec machine. I simply lined up the sensor with the first registration mark and then off it went, to find the other three marks. I was pleasantly surprised to see how this worked straight away with no problems. I was using a plotter pen rather than a blade and the CE5000 drew precisely round the logo that I had printed, showing what would have been a perfect cut.

The speed of the CE5000 was more than sufficient. I always had other tasks to work on, so wouldn't normally use a high speed apart from testing for the purpose of this editorial. Even at high speeds the quality and accuracy remained very good. Graphtec has a reputation for high build quality and robustness and I felt the build quality of this machine was good and the stand supplied had a good quality, heavy duty feel to it. The servo mechanisms sounded consistently smooth, which normally indicates high quality to me.

I used both CorelDraw and SignLab software (although only one is necessary) on Windows 7 for all my work. I also used the vehicle library from Impact Graphic Solutions which I found very valuable for sending proofs to the customer, and making sure that I had all the measurements correct. Cutting Master 2 Plug-ins are supplied as standard for Adobe Illustrator and CorelDraw. I could have used the ROBO Master Pro design software that came with the machine, but I used SignLab and CorelDraw because I was already familiar with these programs.

It is very cheap, quick and simple for anyone to get started in signmaking using one of the Graphtec CE5000 cutters. Being cheap to start up has its drawbacks for the trade, not least in that it makes it an extremely competitive market for sign makers.

Working on Sign Update means that I speak to a lot of people in the industry and I have come to the conclusion that if you want to make money in this business, you need to be able to offer your customers something that not everyone else is able to do. One option would be to buy the larger CE5000-120, which would mean that you are able to cut larger letters and graphics for vehicle wrapping or shop window decoration, which the average local sign maker may not be able to do. Further information on the CE5000 series and more Graphtec equipment is available at www.graphtecgb.com or by telephoning 01978 666700.