When Finch Signs were presented with the opportunity to get involved with the British Touring Car Championships at the end of the 2013 season, Wez and the team were happy to oblige. 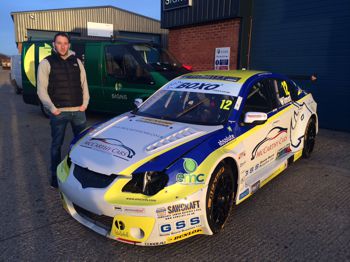 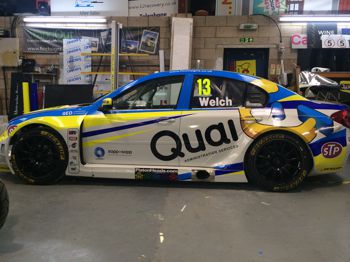 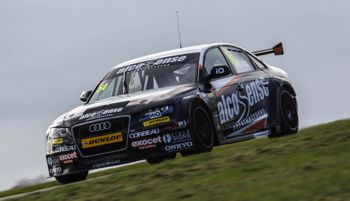 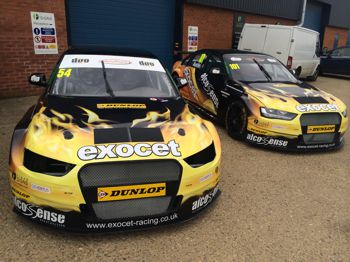 "We travelled to Brands Hatch to wrap the then WIX Audi Rob Austin racing car in Exocet branding, just for the last race of the season," says Wez. "Everyone involved was delighted with the quality of the work and the speed at which we approached the project, and we were then requested to wrap the WIX team car for Ciceley Motorsport with WIX Racing branding on the new Mercedes for the 2014 season. Rob Austin Racing along with their new title sponsors Exocet and Alcosense, also asked us to rebrand their cars."

The vehicles take roughly a day and a half to wrap, and were unveiled at the official BTCC Media Day at Donington Park in March. Finch Signs have now wrapped five of the 30 cars on the grid, making their services in demand throughout the circuit. "We certainly enjoy strong relationships with all the teams we currently work with, including some corporate hospitality, which can be used as a thank you for our regular clients and suppliers," adds Wez.

Given the high speed of the vehicles and the high propensity for crashes and collisions, Wez and the team had to pick substrates that would be tough enough for the job, without incurring high costs or difficulties with application.

The graphics are printed using a Roland 540i, and printed onto a couple of different vinyls; the WIX car is wrapped in Cast Media from Grafityp in Black and Yellow with Rob Austin's cars wrapped in Rapid Air Oralite Cast from Sign and Digital, and the two others are a mix of the same materials. Wez chose these substrates by taking into consideration a number of factors, including cost-efficiency. "Because these cars smash up regularly, we have to keep doing repairs, which means we need an affordable vinyl", says Wez. "There's no point in putting super high-grade vinyl on, so we needed something that would be the easier choice."

In terms of the physical wrap itself, Wez reveals the only issue the team encountered was getting the vinyl to stick onto the bumpers of the vehicle. "With some of the original moulds on the fibreglass bumpers, the vinyl would come away." In order to circumvent this, the team mopped and polished the bumpers to get a shine on them, and tried again to adhere the vinyl to the now spotless surface. "The vinyl sticks a treat, and is sitting onto the moulds perfectly."

A fresh start for Finch Signs

Vehicle livery has played a key part in breathing life into the business, which was founded by Wez, his partner Sue and his son Jake four years ago.

Wez began his apprenticeship working for his father in law, Stan Finch, 25 years ago. Moving on to gain further experience with a larger business and specialising in vehicle livery, Wez his partner Sue and son Jake decided to branch out on their own and set up a new limited company in the name of Finch Signs in recognition of Wez's start in the business. Stan (now retired) is still on hand and a valuable part of the team. Now with eight members of staff in total, the company is going from strength to strength.

Along with successfully retaining Rob Austin Racing and Ciceley Motorsport in 2015, Finch Signs have also taken on the Welch Motorsport Team Proton Cars, including those of Dan Welch and Andy Wilmot, to rebrand their touring cars. Wez and the team will be working on wrapping the vehicles throughout the season, repairing damage caused by collisions, and covering spares. A team of five go to every race day, and enjoy the experience along with the opportunity to tackle high-impact vehicle wraps.

"We pride ourselves on being a family run business, based on traditional signwriting, customer service and values, and use these to blend with modern day design of the cars," says Wez. "We are experiencing much success with our Facebook and twitter pages, and our video found on our website for the 2014 WIX Car was even used for the unveiling of the car to the media. We hope we can continue to build on this valuable form of media and advertising in our future work." 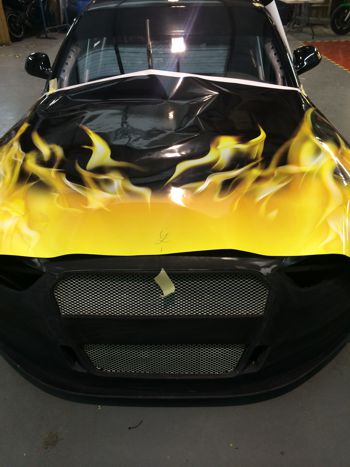 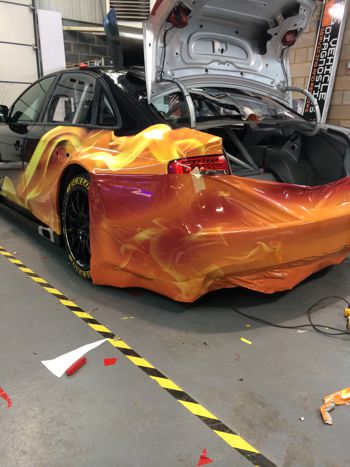