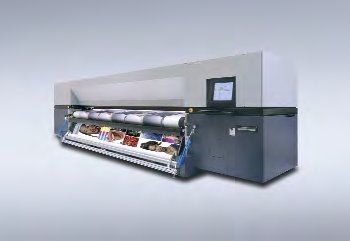 For the second year running, a production roll to roll Durst Rho UV inkjet printer has received one of the most coveted awards that the imaging industry has to offer. The Rho 500R superwide UV inkjet printer, which made its North American debut at the SGIA trade show in New Orleans, was chosen as the Digital Printing & Imaging Association's "Product of the Year" in the grand-format roll to roll UV inkjet printer category.

Last year the DPIA's "Product of the Year" award was presented to Durst for its Rho 320R UV inkjet roll to roll printer during the SGIA trade show in Atlanta. On both occasions Christopher Howard, Senior Vice President of Sales & Marketing for Durst U.S., was on hand to receive the awards during brief ceremonies at SGIA.

Based on a rigorous evaluation process of printer output overseen by a respected independent quality testing organisation, and judged on the SGIA show floor by a team of digital imaging experts commissioned by DPIA, the Rho 500R was judged best in the grand-format UV curable class against all of its major competitors. Entrants were required to submit a test print produced on the nominated printer. The image, designed by SGIA, was created specifically to challenge the capabilities of the output device, according to SGIA.