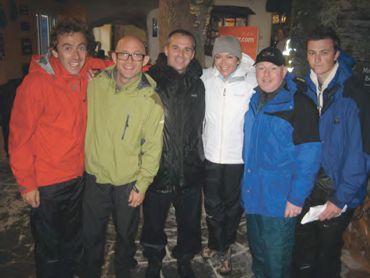 Cypher Digital from Milnthorpe produced a 3m x 1.5m digitally printed enlargement of an OS map that was an essential element in an episode of The Gadget Show on Channel 5 television.

The map was integral to a test of walkie-talkies in extreme conditions in the Lake District. Two presenters, Jason Bradbury and Dallas Campbell, had to get around the mountains in the Lake District, guided by the other two presenters Suzie Perry and Jon Bentley who would provide directions for them by walkie-talkie and show their positions on a 'map table' - WWII bomber command style. In true Gadget Show fashion, the map was located on top of a mountain.

Cypher Digital's brief was to make something suitable for use in wind and possibly rain, but no one imagined how bad the weather would be on filming day. 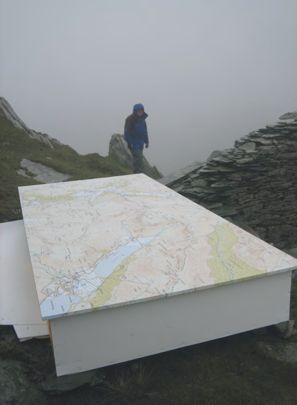 The map was produced in two pieces, printed on Metamark MD5 vinyl using an HP9000S, over laminated, mounted and edge wrapped onto 19mm MDF to give it some 'weight'. A heavy duty wooden frame was built and the parts transported by Paul Calland, Managing Director, and two Cypher Digital team members to what was to become base camp at Honister Slate Mine in the North West Lake District.

Such was the terrain that panels, frames, sides and tools, all had to be carried by hand on the last leg of the journey, which was as near to the top of Fleetwith Pike, 2,126ft above sea level, as it was possible to get.

The frame and map were assembled at daybreak in absolutely appalling weather conditions on the edge of the Pike overlooking Buttermere, Crummockwater and Loweswater in the distance. Unfortunately, the rain was coming down so hard, around three inches in less than an hour, that the usually fantastic view was invisible.

Indeed, so severe were the wind and rain that the crew considered it too dangerous to film at that location, so a relatively sheltered spot was found in the lee of the Pike, on a natural shelf out some of the wind but on the edge of a drop of hundreds of feet. The map then had to be partly dismantled to be carried by hand across the mountain top and lowered down onto the ledge in violent winds, and then re-assembled again.

Filming was able to finally take place around midday. Afterwards, because the weather still hadn't abated it was decided not to attempt to recover the map immediately. A week or so later when the weather had settled, it was a pleasant surprise to find the map still in location and it was retrieved and transported back to Honister Slate mine. 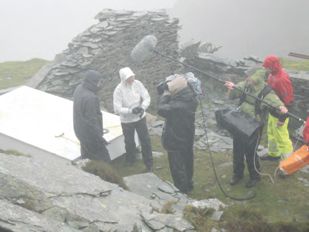 The episode featuring the Cypher Digital map was shown in November.

To find out more about Cypher Digital's range of digital and poster prints, exhibition systems & accessories, giclée and stretched canvas prints, go to www.cypherdigital.co.uk or tel. 01539 563433.