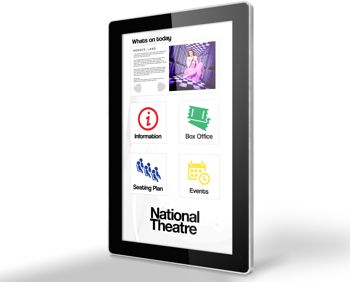 "These displays could be considered the largest commercial tablet on the market; but they are so much more. With a striking aluminium bezel and a sleek design, these displays always manage to catch the eye. Built with a strong tempered glass front and a wide viewing angle, these commercial grade tablets are hard to miss and certainly stand out from the crowd," says a spokesperson.

Having up to 10 touch points allows for a wider variety of applications than before. This kind of functionality allows you to manipulate images, zoom in an out as well as perform many other touch gestures; much like you would with a domestic tablet. It also allows for multiple users interacting with the screen at one time.

Although the screens have an integrated PC with two operating systems, there is also a possibility to attach external devices if required. Simply connect your device to the screen, via VGA or HDMI (for the video signal) and USB (for the touch functionality).

The screen will then serve as your computer monitor and the touch functionality controls the cursor, essentially acting as your mouse.
Available in 22”, 32” and 42”