Wide-format software specialist Caldera has announced the latest version of its digital signage software designed for wide-format print houses, Variable Display 2. The latest updates include improvements to the scheduling functions and a number of new advanced settings, as well as a new plug-in, which will allow print houses to use Variable Display as a dashboard to follow their activity from the production floor.

Variable Display, which was unveiled last year at FESPA 2011 in Hamburg, was designed as a low-cost digital signage solution combining the qualities of printed and dynamic content as an add-on sales product for large-format PSPs. With a specification list that includes control from multiple operating systems as well as smartphone apps, and the ability to drive screens on several different sites through one interface, Variable Display's power and ease-of-use was endorsed by Viscom Düsseldorf in 2011, at which Caldera's solution was used to power all the event's screens. 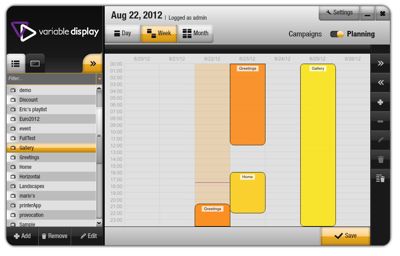 "Since we first launched Variable Display, we've had a great response from printers wanting to expand their offering," explains Sébastien Hanssens, Vice- President for Marketing, Caldera. "Now they can offer a whole package of marketing materials to a client including a digital signage solution that is quick to set up and simple to use. The latest upgrades offer added functionality to the original user-friendly product, offering wide-format houses a unique solution to help them access the potentially lucrative new world of digital signage."

An interesting new development for Variable Display 2.0 is the Print Board plug-in, the first display solution of its kind to interact directly with a RIP engine. The plug-in will allow users of Caldera's RIP software to show an overview of their production activity on a screen for all employees to see, with information including which files have recently been added to the spooler, and the number of square metres processed daily by the RIP.

Enhancements to the AIR interface comprise a large part of the upgrade, including the ability to create users with different permissions. Users will also have greater control over planning and scheduling their playlists and content. A new calendar interface will enable drag-and-drop playlist scheduling, to make planning and implementing campaigns quicker and simpler. The conflict detection system has also been improved to reduce the potential for scheduling clashes.

Each player now also has its own web interface with advanced settings such as the ability to alter network settings, reboot or shut down the device and change passwords. Additionally, the web interface allows the user to define the area of the screen that the player will use - a helpful feature when using outdoor and indoor LED billboards - and the x and y co-ordinates of the playlist frame.

Other new user-focused features include the addition of tooltips, plus the sorting and filtering of content within the AIR interface. The ability to send multiple files to the server is also new in Variable Display 2.0, as is the improved installation process: the user is now able to display the IP address, subnet mask and name of a box by plugging in a USB mass storage key.