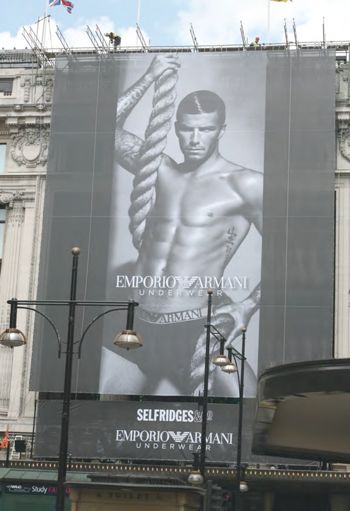 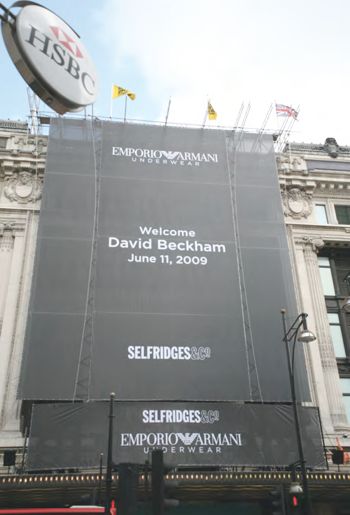 Oxford Street London came to a standstill as thousands of fans arrived outside Selfridges to witness the first huge format banner of David Beckham in his underwear. Gabby Logan introduced the star to the screaming public whilst the banner cover panel was prepared for the reveal.

At exactly the required time the 200sq.m. cover panel was slowly lowered to reveal the previously unseen, huge banner of David Beckham in the much anticipated new Emporio Armani underwear campaign. As the cover panel was unveiled the packed crowds began to scream and cheer as the 350sq.m. banner was revealed to the public for the first time.

To avoid any damage to the facade, including ornate statues above the main entrance to Selfridges or the rear of the banners, the system installed by Rutters and Global Erecting Sign Services Ltd was projected four metres off the building. The system and banners were installed in darkness on the previous two evenings to avoid anyone getting a glimpse of the banner prior to the official unveiling. Following completion of the event, the main banner and system were removed at midnight, returning Selfridges's entrance to its normal appearance.

To facilitate the building of the system support structure, Global Erecting Sign Services Ltd brought in and supervised a professional scaffolding company to install over 20 tonnes of scaffolding to support the top and bottom frames in order to enable them to cope with the loads created by the huge banners.

Rutters UK and Global Erecting Sign Services Ltd are experts in the design and installation of huge format banners and systems and are finding the demand for massive unveilings increasing every year.

The event received huge media coverage and client feedback was extremely positive. For further information on any details of the project, please contact Paul Rutter of Rutters UK on 01223 833522, www.ruttersuk.com or email paul@ruttersuk.com 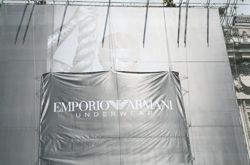