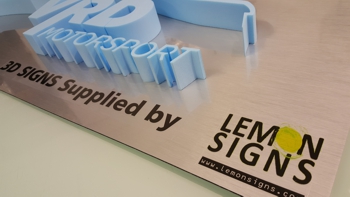 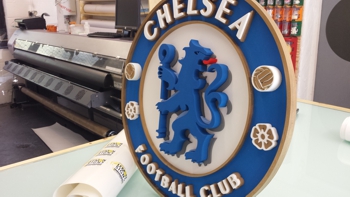 The process starts with the insertion of a sheet of plastic extruded film, then the design file is sent through, and the printed layers are cut and glued together to build the letters. The materials are cut using a hot wire cutter as opposed to a CNC machine, and they are then filled using a special type of foam. “The foam used inside is similar to the foam used to insulate buildings, really light and really strong,” says Martin. “We then paint it either for external or internal use, and glue all parts of the sign together. We are still testing various glues to see which has the best results. We have a couple of test letters outside in the elements now to compare and see which works best.”

Letters are finished using an epoxy resin or durable outdoor lacquer to prolong the lifespan, which is on average about seven years, at which point the letter’s exterior should be recoated. “In terms of the internal foam, that should last virtually forever,” says Martin, adding that they are still playing around with ideas for halo illumination and other types of lighting.

A new era for built-up lettering

This method is popular in United States as well as Poland, the latter being the origin of the machine used to create the letters. “The climate there is much harsher than that of Britain, but they use that method because it’s cost-effective. The fact that letters have been tried and tested in harsh winters and hot summers proves that they can withstand the elements, so all we need to do now is convince people here that it’s a very good alternative to the traditional methods.”

The foam letters can cost up to 50% less than these traditional methods, and the turnaround time is much quicker than producing something in steel for example. In fact, Lemon Signs completed one project within five days of the initial idea being discussed. In addition to the lower cost, there is also the lower weight of the letters as an added benefit. “In terms of health and safety, I imagine the weight is about one tenth of a traditional built-up letter,” he says.

Lemon Signs have completed a number of high-profile projects using this new method, including signage for the high street brand Wilkinsons. This project involved supplying numerous 3D logos for their exhibitions and conferences, with one now on display in their headquarters.

While the team continues to hone the new technique, they are convinced that it boasts numerous advantages and options for the future. But first, clients need to be won over. “People can be hesitant about the method as they’ve never seen it before,” says Martin, “so it takes a bit of effort to drop some samples off and explain the process. However, once people see it’s a really lightweight product, lighter than say a traditional stainless steel or extruded plastic letter and yet still the same quality, they’re convinced.”