Vectric Ltd. is proud to announce new full releases for both Aspire and VCarve Pro, their two main CNC routing software packages. These new versions include significant changes and enhancements in all areas of the programs. The starting point for the releases was to work through the most heavily used tools, evaluate how they are used and see if they could be made even more intuitive. This has resulted in enhancements that will improve the general work-flow for both new and existing users. In addition to this foundation work, some major new features we’re added to expand the power and scope of each program. 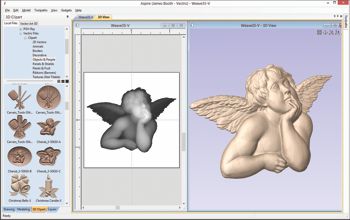 The most noticeable difference with both Aspire 4.0 and VCarve Pro 7.0 is the change to the interface layout. The icons have been re-organized to put them into more logical groups and sections. After the initial release of the software, Phil Thompson a user on the Vectric User Forum wrote, “I just downloaded and opened Aspire 4.0. WOW! Beautiful, elegant, powerful and intuitive, you guys have outdone yourselves”.

Both VCarve Pro and Aspire have benefitted from significant enhancements to the drawing tools. The improvements to snap- ping help speed up the creation or editing of vectors. Many existing features such as alignment, mirroring, offsetting and arc drawing saw an expansion to the controls for each tool. Nesting, Curve Fitting and Image to Vector conversion all now have a Preview option to make it easier to iterate through different values to quickly optimize the best result. New options to extend lines to a common intersection point and to create simple dimensions for 2D objects were also added to the Design features.

Exclusively for Aspire there are a number of big changes to the 3D Modeling functions. The most significant is a flexible new tool called "Extrude and Weave". This is a very powerful way to create complex shapes from fairly simple sets of vectors. The "Two Rail Sweep" tool has been completely overhauled, adding the ability to use multiple interactively editable cross-sections; this gives the user more control of the shape being modeled. There is also a new tool to "Add Draft" to a model which lets you created angled side-walls to create shapes that can be used for applications like vacuum forming molds. In addition to the new features there has also been a major overhaul and increase in the free 3D Clip Art models supplied with Aspire. There are now over 400 individual designs with variants that take the total to over 1000 free models. Angie Orfanedes a long time user of Aspire commented that, “I appreciate all the pro- gram changes to make life easier... but I am absolutely amazed at the new range of clip art”. Some of the Clip Art files also contain vector data to allow the user to easily create alternate versions of things like borders and weave patterns.

The focus in the machining side of each the program was to improve ease of use. In particular there are some important new op- tions when previewing the results of a toolpath. You can adjust the speed of the preview to make it easier to visualize the details of how your part is going to be cut. Once the preview has finished, you can now interactively re- move any of the waste areas to remove them from the 3D View, this allows creation of a very accurate 3D shaded image of exactly how your part will look when its actually cut. This is beneficial both for time and material verification or to create images for customer approval.

A number of other general improvements were also made to VCarve Pro and Aspire, to import or open data there are now many more options to drag and drop files directly into either program. In addition a direct import for 3DM files has been added to Aspire for importing 3D data from the popular Rhino modeling software. The Layer manager has been overhauled and given its own location to better manager and organize 2D data in both programs. More support for ‘Gadgets’ have been added, these allow users with programming ability to create their own custom tools for use in either program. 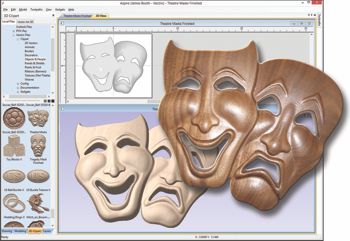 Brian Moran, Managing Director of Vectric is very pleased with the new release commenting that, “The feedback from customers who have worked with the new versions has been very positive. Although it’s tempting for a software company to just add-on new features we wanted to ensure the functions our customers use day to day were not ignored. Combining this work on the foundations of the software while at the same adding powerful new tools has really made this a major move forward for Vectric’s two flagship programs”.

Vectric is a UK based company specializing in Design and Machining software solutions for CNC Router users. Due to an emphasis on customer success, based on affordable, easy to learn but full-featured products, Vectric has seen year on year sales and personnel growth since being founded in 2005. This growth was recognised when Vectric was awarded the prestigious Queen’s Award for Enterprise: International Trade 2010.