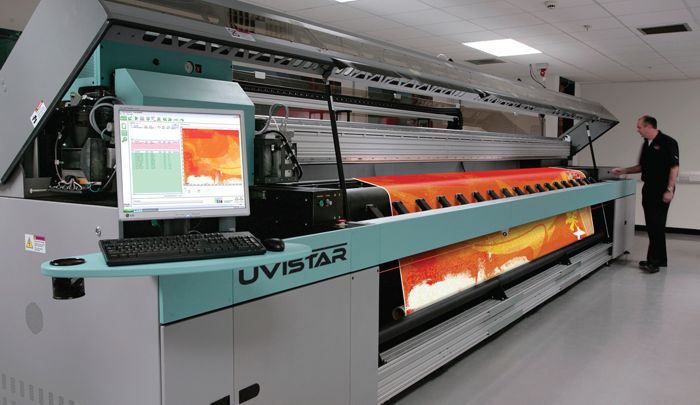 Fujifilm recently announced the European launch of the Uvistar series of UV inkjet roll to roll printers. These new printers use Fujifilm Sericol's specially developed Uvijet QK inks and can print on rolls up to five metres wide, altering the way that material for both billboard and POP applications will be prepared in the future. As an industry leader in the constantly evolving UV inkjet marketplace, Fujifilm is introducing the range in response to a new and rapidly growing revenue opportunity for superwide format printers.

Keith Harley, European Marketing Director at Fujifilm Sericol, says: "The billboard industry is on the cusp of a major makeover, and traditionally-pasted billboards will be replaced in the coming few years with state of the art frame holders in which a poster printed on woven polyethylene (PE) can be clipped or stretched. Several systems are already on the market, and the demand from media sites is set to grow exponentially."

Looking for the right technology to answer printers' needs for single skin posters to fit the new format, the Uvistar series has been developed from a relationship that was initiated by Fujifilm with inkjet printer manufacturer Matan at FESPA Digital in 2009.

The Uvistar is available in four different models, producing high quality output at throughput speeds in excess of 300m2/hour. A proven multi-roll system with a highly intuitive user interface, it provides fast and efficient start up with low media wastage, and has the ability to handle rolls of varying widths up to five metres. In combination with the new Fujifilm Sericol Uvijet QK inks, the printers can produce jobs on a very wide range of flexible media, including PE, with no curing or ink starvation issues and with excellent inter-coat lay down for backlit and solid prints. The Uvijet inks are also low in odour, making the Uvistar series suitable for both indoor and outdoor applications.

"With our in depth experience of both the screen and inkjet markets it made complete sense for us to look for a printing device that we could develop together with our inks so that it would provide the ideal solution for these new billboard applications that are coming on to the market," comments Keith Harley. "A major advantage of the Uvistar platform is that it can print on huge rolls of polyethylene as well as all of the usual media in combination with the Uvijet QK inks, produces an end result that is more environmentally friendly, cost effective and most importantly, opens up a new revenue stream for our customers.

"We pride ourselves on being able to work with technology partners to develop products that will fill a gap in the industry," he continues. "The Uvistar is making use of the Fujifilm Sericol inks and colour expertise, which will enable customers to produce superwide format material for both indoor and outdoor applications that is both environmentally friendly and of superb quality."

Customers will be able to print huge outdoor banners on PE media which is already starting to overtake PVC. PE material has the benefit of being much more environmentally friendly than PVC as well as weighing much less, which brings attractive cost saving benefits to end users. In addition, it eliminates the pasting process necessary with traditional billboards, and therefore has a positive impact on health and safety. As solvent inks do not adhere to PE materials, printers will need to adopt a UV offering to stay ahead in the marketplace.

The five metre, 32 head version of the Uvistar printer is available for customer demonstrations at Fujifilm Sericol's facility in Broadstairs, UK.