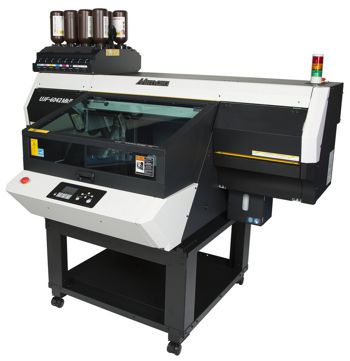 The new printer offers a number of superior features over its highly successful predecessor, says Hybrid. These include increased productivity with print speeds 20 per cent faster than before, and "exceptional" print quality.
Hybrid’s National Sales Manager for Industrial Products, Stuart Cole said: “The UJF series has been popular since its launch in 2009. We can see that Mimaki has looked at the expanding needs of both the sign and graphics and the manufacturing industries, and produced a model that exceeds expectations.”

The UJF-6042 MkII was launched in September along with the smaller UJF-3042 MkII, which replaces the UJF-3042HG; with both new models printing thickness up to 153mm. They are compatible with a range of Mimaki’s versatile UV inksets, such as LUS-120 with flexibility up to 170 per cent; and LUS-150 with "superior" adhesion for outdoor purposes.
The new MkII printers will sit alongside Mimaki’s other offerings in the UJF series; the affordable entry-level UJF-3042FX. And the UJF-7151plus, which gives on-demand printing of the "highest quality" at industrial production level.

“We want to provide people with the opportunity to have a holistic overview of Mimaki’s UJF Series and its capabilities all within the comfort of our showroom,” says Stuart. “We will be able to demonstrate a wide selection of direct-to-object applications with a variety of ink types under one roof, giving print companies the opportunity to get acquainted with this superb range of small format flatbed printers.”