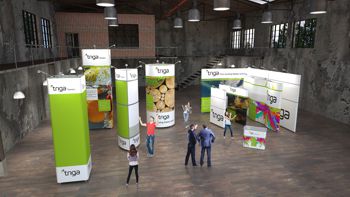 Triga is a unique tensioned fabric display system that has recently been introduced to the UK and European display market. Triga was originally launched in South Africa where it was invented, and continues to be a 'dominant' force in the exhibition and display arena. It has been established in America and Australia for the last eight years.

With the growth of digital textile printing, Triga is ideally positioned as a preferred choice for companies wanting an easy to construct display system, says the company. Being tool less, it can be reconfigured to create walls, towers (up to 5m high), desks, wall mounted and shell scheme mounted displays.

Triga is a modular portable system that tensions the graphic when the graphic is on the framework. This avoids those tricky situations where the graphic will not fit a pre constructed aluminium profile. A 5m x 2.4m display wall will pack into one wheeled bag and weighs less than 18Kg; so transportation and storage is no longer an issue. Recently Triga UK constructed a 14m x 3m free standing wall for a car dealership that took two people just under one-hour to build, including applying the graphic, which was in one piece. Triga is constructed vertically so very bit of floor space is taken up when building. TV’s and shelves can be attached as and where required. 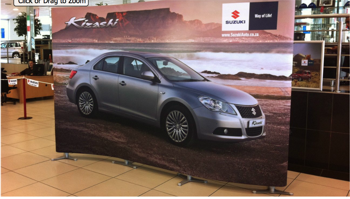 The floating wall concept using Triga is an adaptation where the mechanisms are hooked onto a shell scheme wall and the graphic is applied in one piece allowing seamless walls to be created with minimal hardware, which maximises floor space.