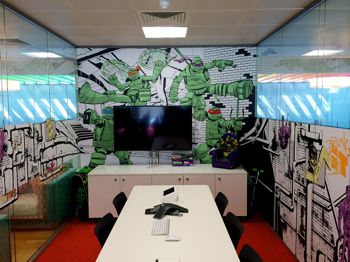 Additions to the IMAGin series comprise the WW100/101, WW200 and WW300 films that can be printed using the most popular ink technologies, and have Class 0 FR fire-resistant ratings.

WW100 is a highly conformable gloss white three-year interior/exterior laminated PVC film. It can be applied without lifting at the edges direct to brick walls and similar concrete surfaces. The film can also benefit from additional surface protection through use of a choice of compatible over-laminates. The WW101 version of the film allows the natural colours of the underlying substrate to be seen.

The semi-rigid 150-micron one-year WW200 film has a removable adhesive that enables it to be easily applied to, and purposely removed from, smooth flat surfaces. Designed for application to more difficult surfaces (such as Latex-painted walls), WW300 is a four-year white matte film that is "ideal" for medium-term interior/exterior décor applications.

When used with the anti-slip PF600 over-laminate, the film can be effectively used for commercial-grade floor/carpet graphics applications.

Additions to the MACtac Decart range include the vinyl-based DecoMural and the canvas-based DecoCanvas options. Both films can be used for a wide range of interior commercial applications, such as hotels, retail outlets, conference suites and building reception areas. DecoCanvas also being ideal for fine art reproductions in addition to professional décor applications, according to the company.