Following the success of the Lumenlinear LED Trough Light System, Spectron will soon be launching the new and improved Lumenlinear-X – a self-assembly system featuring waterproof high-powered modules and no cover.

Simple to use, totally efficient and as fully flexible as its predecessor, the Lumenlinear-X features four main components: main body; fixing brackets, end caps and fillets. It is powered using waterproof high- powered LED modules with an optical lens which directs the light beam only where required. Also, the system has no cover, completely eliminating the problem of water ingress and mould. 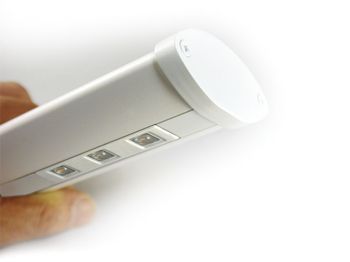 Other products on the market use off-the-shelf silicon covered LED strips which over time can crack and discolour. The adhesive backing strip on LED strips can also hinder heat dissipation and weaken the lifetime of the LEDs.

The benefit of using modules is that in the unlikely event that a module fails, it can simply be cut out and replace. Using LED strip, it is almost impossible to rectify the problem without removing the entire unit. We have designed the system with a remote driver for the same reason – the driver is IP68 rated so can be positioned internally or externally, allowing you full flexibility and easy replacement.

The fixing bracket has also been redesigned; it is more substantial than the Lumenlinear and the angle of the trough light can be adjusted using different channels on the main body or by turning the entire body the opposite way round.

Brightness is adjustable by increasing or decreasing the distance between the modules – you have total control. Each metre uses approximately 10 Spectron modules at 1.5 watts each.