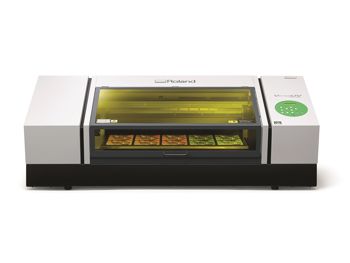 Roland DG Corporation recently announced the addition of the LEF-300 to its VersaUV series of UV-LED flatbed inkjet printers.

Print professionals around the world are already using the VersaUV LEF-12 and LEF-20 printers to customise a range of items, says the company. With the addition to the series of the larger and faster LEF-300, customers can achieve 'even greater productivity'.

New features on the LEF-300 include an enlarged printing area of 770mm wide by 330mm long. This is 50 per cent more than the previous model and can accommodate items up to 100mm in height and 8kg in weight. With four print heads and two UV-LED lamps, the LEF-300 enables bi-directional printing approximately 60per cent faster than the LEF-20. The number of white and clear (gloss) ink nozzles have been doubled for faster printing, increased density and opacity and faster build-up of multiple layers for textured effects.

The LEF-300 uses Roland DG’s ECO-UV ink in CMYK, White and Clear (gloss) for 'premium high-quality durable print and to reduce the shrinkage of thin film materials when curing'.

The LEF-300 can print on a wide variety of substrates such as acrylic, wood, board, plastic, metal, glass and fabrics and soft materials such as leather. A vacuum table makes it easy to hold thin and soft materials in place. The device direct prints on to a huge range of items such as pens, mobile phone cases, customised corporate merchandise and signs.

Jerry Davies, President-Roland DG-EMEA said: “The trend for highly personalised items is growing and customers are using Roland’s VersaUV LEF printers to build profitable businesses. The launch of the LEF-300 model brings the VersaUV series into the mass production environment with a number of features to facilitate the customisation and decoration of items in high volumes."

For safety of users and to maintain print quality, the moving parts of the VersaUV LEF-300 are also fully encased. The cover prevents dusts from entering the print area; keeps the UV-LED light contained; and means the device can be used in any busy print shop, industrial or retail environment.