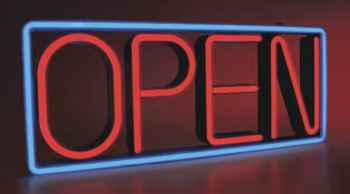 Although Promotion & Display Technology (PDT) is primarily a designer and importer of consumer electronics, the company has been involved in LED signs and Moving Message Displays since 1988 when it started importing electronic displays from Taiwan.

Over the last few years, standard Open signs have become a very popular item for many high street shop front premises. Initially the signs were manufactured using traditional neon, but because they were made in large quantities compared to custom made neon signs, the pricing was within reach of even the smallest businesses. However, neon was expensive to run and extremely fragile and does not have a very long lifespan. Over the past couple of years LED Open signs have largely replaced the older neon variants, and many thousands of these can be seen throughout the UK. They are more energy efficient than neon and longer lasting but not quite as eye catching as the original neon products. 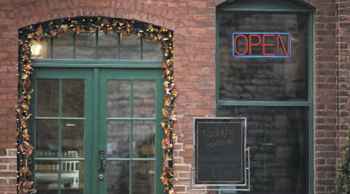 Now PDT has just launched a new product that is actually lit by LEDs but has the rich look and colours of genuine neon. While this has been tried in the past using LED tubing, a completely even light effect that looks like neon is pretty difficult to achieve. The company says its new Open sign looks exactly like neon, has really rich neon red and blue colours and costs very little to run, in fact even if left on for 24 hours a day, seven days a week, it would hardly dent an electricity budget, costing just two pence a day to run.

The tooling is light weight plastic and its skeleton design makes it look even more like genuine neon. It runs completely cool to the touch and is a true energy efficient green product. Weighing very little, it can be hung anywhere with a minimum of mounting hardware required (a chain is supplied). To draw even more attention, the sign can be set to flash and cycle like a traditional neon and there is a choice of eight speeds.

PDT are currently looking for distributors in the UK to bring this sign to the public. With a retail price of just £99 plus VAT to the end user and generous margins for the distributor, this could become a winner in terms of convenience, profit and green compliance. For further information telephone PDT on +44 161 925 7541 or visit www.pdtuk.com