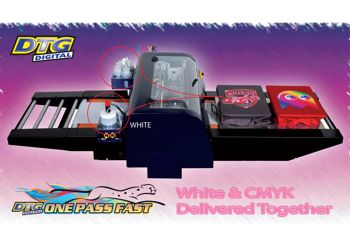 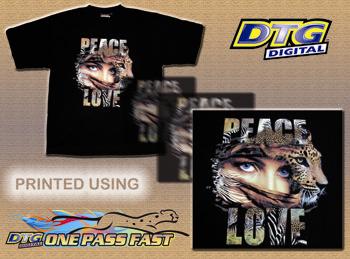 Users of DTG direct to product ink jet printers could have a colossal advantage over their competitors in the future with the launch of One Pass Fast. This new development will revolutionise the industry having achieved what everyone thought was impossible, to print the white and the CMYK inks during the same pass.

Before you can print a coloured t-shirt using the ink jet method you must first put down a layer of white ink, just like with screen printing. The software decides where the white ink should be and, on the first run, prints only the white ink onto the shirt. It is on the second run, or pass, that the CMYK ink is laid down and the coloured image produced. With One Pass Fast these two passes are combined into one, effectively halving the print time. The distributor for UK and Ireland, Your Embroidery Services Ltd, is over the moon with this amazing addition to the already extensive DTG catalogue.

A spokesman said "We are completely bowled over by this development. Our technicians together with those from DTG have been quietly working away in the background on this. We like most other in the industry never imagined that it would ever be possible to print white and CYMK inks at the same time but we were obviously wrong. It just goes to show what can be achieved when you have management and technical staff that are never satisfied with what they have got".

The latter statement could not be truer as DTG and YES Ltd. never seem to be satisfied with their lot and are always looking for the next development that will give their customers the edge with One Pass Fast though they are not just offering them a small step forward but rather a gigantic leap in both technology and production. In effect DTG users will be able to produce up to double that of other similar printers or, to put it another way, halve the unit cost. Apart from the effect this will have on the immediate market it could also have a ripple effect on other industries because if the increased competiveness. The good news doesn't end there either as One Pass Fast is patent pending so the technology will remain in the sole domain of DTG users.

Since it first appeared ink jet technology has been the subject of disbelief. Putting ink directly onto cotton; developing a white ink suitable for ink jet printers; curing the white ink without using heat and without moving it from the printer; all thought not to be possible until now. With each of these though the disbelief has been shattered with Your Embroidery Services Ltd and DTG at the forefront of every development but this latest advance tops all that has gone before.

One thing is for sure, if you want to be up there with the leaders in this type of technology and compete at the highest level then you will have to use DTG One Pass Fast because nothing else on the market can keep up with the level of production that can be achieved using this system, says YES Ltd.

For more information about the DTG One Pass Fast contact Your Embroidery Services Ltd on 01623 863343 or e-mail them at sales@yesltd.co.uk You can also get details via the web at www.yesltd.co.uk