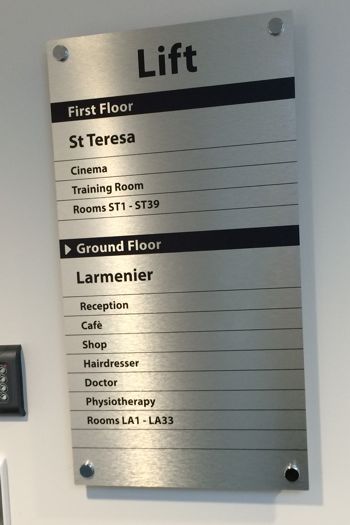 Directory and wayfinding signs make it easy to direct people around large premises, but can be difficult and expensive for the end-user to manage. Display Signs in Uxbridge thinks it has the answer.

The company has developed a "highly systemised" approach to design, manufacture and deploying directory and wayfinding signs, which the company believes will greatly simplify life for the end-users. They have called it Indicia.

They initially piloted the system at the care and assisted living sector. This market requires high standards of legibility and consistency across every element in the signing programme. Deployment, updates and repairs need to be easy to manage too.

The Indicia system delivers all these objectives, says Display Signs. Rather than rely on a heavily engineered sign system of extruded aluminium profiles, plates, inserts and other parts contributing to a high component count, cost and complexity; Indicia is centred on single plates of attractive, rigid materials, typically secured to the wall, door or other surface with simple stand-off mountings. Other fixing system are easily accommodated.

Each plate used can feature a single message element or a design comprising several visual elements. Layout is determined as a consequence of the needs of the overall design and the messages it needs to communicate. It’s not dictated by the rigid requirements of a component-based system’s construction, says the company.

They say that Indicia is simple enough for anyone to install. Plates can be secured by simple stand-off mounts as easily as hanging a picture on a wall. The result is secure and permanent to the extent it resists casual efforts to remove it.

Everything that ever is or will be printed or designed for the Indicia system is archived at Display Signs. Repeat orders, or orders involving new data are easily referenced to original designs. Rather than replace a single message element, the whole single plate is inexpensively replaced so keeping the colour fidelity and overall feel of the design intact. Signs are made using a Tekcel router and an industrial Hewlett Packard printer.