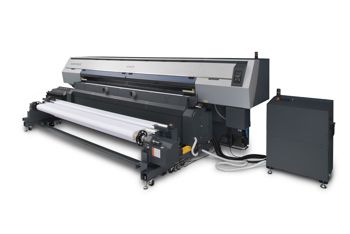 Mimaki has announced the launch of the Tx500P-3200DS 3.2 metre direct sublimation printer, the latest in a number of products launched in the last few weeks. With its built in, in-line heat fixation unit, the new printer "significantly reduces" production time through its simultaneous performance of two operations; printing and colour fixation, which reduces two steps to one. With a print speed capability of up to 130m² per hour, the Tx500P-3200DS is ideal for production of samples as well as large batch production with short delivery times, says the company.

Mimaki cites the growing demand for soft signage, with its economic and environmental benefits, as a key driver behind the development of the new model. The new Tx500P-3200DS was specifically designed to meet the requirements of the textile industry, which is moving ever-larger volumes from analogue to digital printing, to meet market demand for the growing number of small lot orders and shortened cycle times. The benefits of the new printer will also make it ideal for meeting the growing demand created by custom orders that require a speedy turnaround, received via the internet by print providers.

The Tx500P-3200DS is uniquely suited to a wide array of textile printing, says Mimaki, such soft signage, customised apparel, and fabrics for home décor and furnishings. It has print speeds of up to 130m²/hour in four-colour print mode and up to 105m²/hour in six-colour mode. It also delivers "unmatched print quality" with print resolution up to 720 x 1080 dpi using 12 print heads in a staggered three-line array. The in-line heat fixation unit, capable of generating temperatures of up to 200°C, makes sure the machine is able to perform its full "single-step" print and fixation process even at the highest operational speeds.

Consistency and stability of print quality are achieved by a pulling roller that maintains appropriate pressure during printing onto rolled textiles, with widths up to 3.2 meters and up to 130kg in weight.

The machine can automatically detect and clean clogged print nozzles and substitute good nozzles for printing during this process, which allows for the operation to continue and reduces waste created by defective nozzles.

This new printer features "precise placement of well-shaped ink droplets onto the fabric for the best possible quality". This is accomplished by automatically taking into account the specific gravity and viscosity of each ink, precisely placing droplets as small as six picolitres for "beautiful, high resolution" printing results.

Exclusively distributed in the UK and Ireland by Hybrid Services Ltd, the company’s National Sales Manager - Textile & Apparel, Stephen Woodall said: “The new machine's ability to deliver print and heat fixation in a single operation is a genuinely unique feature, which is certain to have a major impact on productivity and profitability for users. Direct sublimation transfer printing requires the fixing of printed inks through heating, and this machines ability to deliver this at the same time as printing removes a step in the traditional process.”

The first machines are expected to be shipped in January 2017.