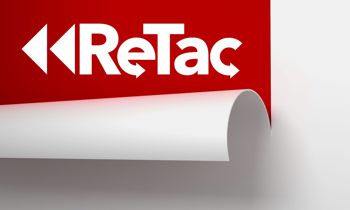 The new additions to the line include ReTac75 Matte and ReTac150 Gloss. They sit alongside the existing ReTac75 Gloss film which was announced in 2014.

ReTac75 Matte
ReTac75 Matte is a 75µ white polymeric PVC film, coated on one side with a pressure-sensitive permanently peelable adhesive. Specifically designed for high vibrant print quality graphics, the film is 'easy to apply and easy to remove or move'. With its newly-awarded Class 0 Fire Rating, ReTac75 Matte is ideal for numerous applications including public areas, such as airports, hotels and hospitals, which require compliance with strict fire regulations.

ReTac150 Matte
ReTac150 is a 150µ matte white polymeric PVC film, coated on one side with a pressure-sensitive permanently peelable adhesive. It benefits from all the same qualities as ReTac75 including Class 0 Fire Rating, but the increased thickness of the material makes it 'easy to handle'. It is also great for wall installations as the film hides any imperfections on the surface onto which it is mounted.

Steve Broad, Sales Director for Drytac Europe, said: “The new additions to the ReTac range have been developed in order to complete the range of films so that they can now meet any permanently peelable application requirement. The ReTac75 materials are ideal for conformable surfaces, whilst the ReTac150 films have been developed specifically for rigid print applications.

“The ReTac technology has been developed to give customers the confidence that removal of the graphics will not damage surface areas. Many removable adhesives build in strength over time, but ReTac doesn’t. It makes sure that the graphics can be removed and moved numerous times without damaging the surface onto which they’re been stuck.”
www.antalis.co.uk
www.drytac.co.uk