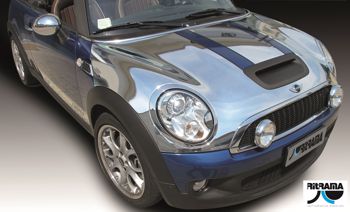 Ritrama's new film Cyberkrome SILVER, which is part of the RI-WRAP Range, is an adhesive with "great appeal and easy to use", says the company. This they say is due to the micro-channel AirFlow technology allowing fast applications, without air bubbles or wrinkles, even on slightly curved or convex surfaces. It also has an "excellent manageability with no need to perforate the film, an operation that might compromise its particular finish".

Thanks to its mirror effect, Cyberkrome SILVER can be used in two different ways; as a classical film covering the surface to be decorated. Or as a printable film to create original graphics and signs using a chrome background, for a "strong visual impact" while also provide a high resistance to shocks and scratches. With this innovation, Ritrama completes the Cyberkrome range of coloured CAST films with chrome effects, available in red, yellow / gold, green and blue; able to stand heat, deformation or stretching during application. This material is supplied in rolls 152 cm wide, a characteristic that makes it one of the few chrome films available in this width.

Cyberkrome SILVER, thanks to its particular finish, gives a "strong visual impact and is suitable to be used also for DECO Design allowing a total or partial indoor living renewal, supplying a final “mirror” effect that will not go unnoticed".