Log in
Tweet
The Union of Czech Zoos, was established in 1991, and all 15 Czech and four Slovak zoological gardens are members. They co-operate in the breeding and rearing of species native to Central Europe and, on a wider scale, participate in a number of international programmes for the preservation of endangered species. 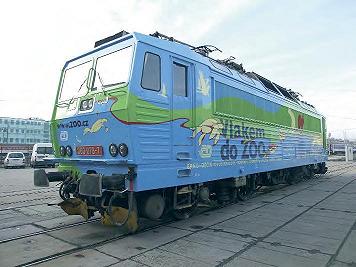 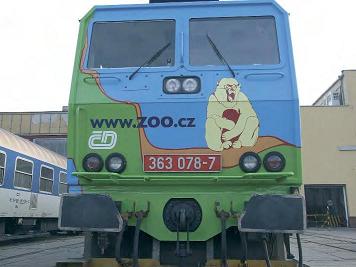 The Union is employing a very effective vehicle to heighten public awareness of their activities: Czech rail travellers are being treated to the sight of a liveried, powerful locomotive rumbling into the station looking more like Noah's Ark than the 9.52 for Bratislava! Previously, all graphics on trains were painted and only small areas of cut vinyl or digital printing were applied, but the Union engaged the collaboration of Safex, who are the official partner of Kay Premium Marking Films Ltd in the Czech Republic, to achieve the first full wrapping exercise, of its kind, that has been undertaken in the country. KPMF provided technical support and all the films employed on the exercise.

From the start of the project, Safex were consulted on the methodology and materials and co-ordinated the complete application, which took a team of four people nine days, working in an average temperature of five degrees.

Whilst the locomotive's relatively straight lines presented only minimal challenges, the area of the engine was quite daunting at 120m²: the printed graphics accounted for a quarter of this space. The engine body was covered in K50000 calendered vinyl and K70000 cast vinyl, providing excellent durability and protection. VWSII was chosen for the graphics, which were printed on a Solijet pro111 XJ-640, using Permacolor. For the train's windows, the choice was VistaView, printed in the same colour as the rest of the engine and laminated with Ultra Clear K70005.

In line with their green credentials, KPMF can now claim that their products are also helping to draw attention to the threat facing a number of the planet's wildlife species.