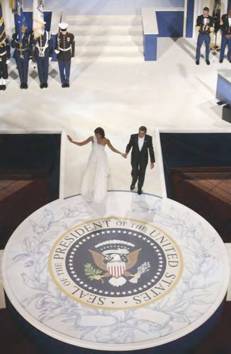 Few people watching the inauguration of Barack Obama as 44th President of the United States would have realised the role EskoArtwork's Kongsberg i-XL played in the proceedings.

For Hargrove Inc, a management firm for special events, custom exhibits and trade show services which has been a major contractor for every presidential inauguration since 1949, time was of the essence. The company had seven days to provide all the services for the inauguration: 10 balls, three dinners, seven floats and many other events, entailing 44 separate jobs in 34 different venues over six days. Most of the decorations used in these events were printed on a Vutek QS3200 large format printer and cut on an EskoArtwork Kongsberg i-XL.

Hargrove CEO Tim McGill said: "It was extremely gratifying to be able to fabricate some of the unusual components for major inaugural events like the concert at the Lincoln Memorial and the Neighborhood Ball."

Hargrove produced a 10,000 square foot floor for the performers at the Lincoln Memorial as well as the faux walls used to hide the 22-feet tall scaffolding and the moveable walls that closed and opened to allow for set changes.

"At the Neighborhood Ball, President and Mrs Obama had their first dance on a custom-built circular stage with a faux finish applied by local artisans," McGill said.

The company also produced its largest Presidential Inaugural Seal ever for that ball.

"Normally, we produce hundreds of inaugural seals ranging from 30 inches to 12 feet," he said. "For the Neighborhood Ball, we produced a wooden, three-dimensional seal 16 feet in diameter." 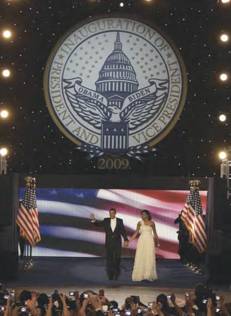 Fred Strickland, director of production at Hargrove Inc., said: "The EskoArtwork Kongsberg i-XL with i-cut vision system saved the day. It allowed us to cut all of the items we printed without any effort at all. We are proud of what we have been able to accomplish."

The Kongsberg i-XL is a die-less cutting and creasing table that delivers record-breaking productivity and versatility. It perfectly complements digital printing of sign and displays with unique finishing solutions on the widest range of materials, providing automation, high productivity and outstanding precision. Printed signs and displays can be custom-shaped right on the finishing table. The i-cut vision system makes sure that finishing is adapted to the shape of the graphics, which guarantees a cut contour that perfectly matches the printed graphics. The shaping itself, like contour cutting, follows the graphics exactly as created by the printer.

For more information on the EskoArtwork Kongsberg i-XL, visit www.esko.com and for further details about Hargrove Inc projects, go to www.hargroveinc.com