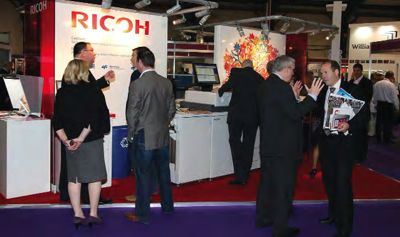 The hall was bustling once again as Print Ireland and Sign & Digital Ireland returned to the RDS Dublin on the 23rd & 24th September 2009.

Some 1191 visitors came to this year's show, and the overall total attendance at the event was 1386, which includes press, speakers, students and exhibitors. Many of these visitors used the opportunity to make purchasing decisions and gather information to put their businesses ahead despite the difficult economic climate.

Late opening gave visitors the opportunity to visit after work and this clearly was a success as visitors stayed in the halls right up until the 8pm closing time.

The Adobe theatre again proved a big hit as it was busy throughout the show right up until closing time on the last day. The Sign & Digital Ireland and Print Ireland seminar theatre made a steady debut at this years show with a consistent number of visitors throughout.

Rudi Blackett, event director comments: "We are delighted to report that the show has once again been a big success. Despite the difficult economic climate, exhibitors reported significantly better than expected levels of trading at the show. I would like to give a big thank you to all of our exhibitors and visitors alike, who contributed to the success of Print Ireland and Sign & Digital Ireland 2009."