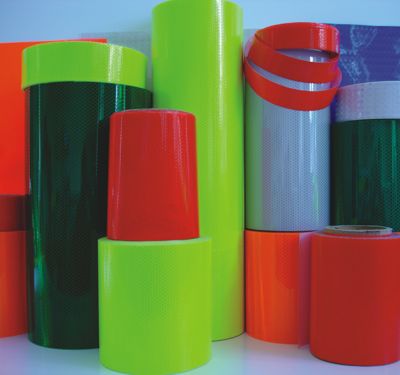 The UNECE104 legislation due to come into force in July 2011 means that all newly registered HGVs weighing more than 7.5 tonnes and trailers of more than 3.5 tonnes operating in the UK must have retro-reflective vehicle safety markings.

The new rules are designed to increase the night time visibility of HGVs in order to reduce the chances of an accident. At night an HGV with the safety markings can be seen from up to 1,000 metres away; it is calculated that motorway drivers would see the HGV with safety markings up to nine seconds earlier than the same vehicle without markings.

McGill Signs' Hiviz Reflective vehicle safety marking tape and banner material utilise a diamond pattern, as many of the market leading products do, to provide a particularly high level of light reflected from the media. Both safety tapes and banner materials are available in yellow, green, blue, white, red, and orange.

"Massive savings can be made from choosing our new ranges compared to other high visibility media. A roll of our 50mm safety tape is about half the price of what some high visibility tapes can cost," says Phil McGrill, Proprietor of McGill Signs. "Also, it's very unusual to have banner material in more colours than just white. This new material can now be produced in many reflective fluorescent colours in banner material and reflective self adhesive tape for vehicle application."