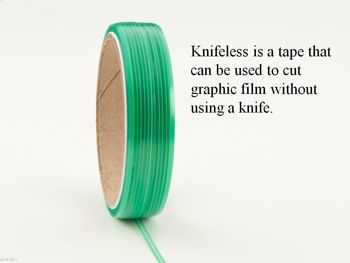 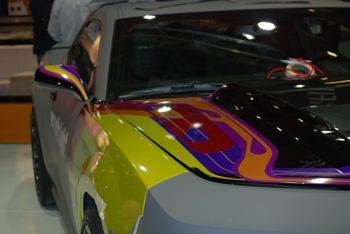 I was given the opportunity to try the new DesignLine knifeless tape, and in doing so wanted to answer question:

Does it cut as well as a plotter blade?

At FESPA, Sign Update met up with Jason Gunnlaugson, Account Manager at Knifeless Technology Systems. We were given the opportunity to watch a demo of Knifeless being used, and I had to agree with them at the time that it cuts as good as a plotter. Jason explained the popularity of the product had been seen in the FESPA Wrap competition. "Everybody had to use our tape in the wrap contest," he explained. "They made them use the Knifeless in certain spots where they would have perhaps cut with a knife."

DesignLine is not a replacement for Knifeless's Finish Line, which is their more general product for most wrap applications, but another tool for the artist. DesignLine is their newest product launched earlier this year. Other products include:

Knifeless tapes have been on the market for about 2 ½ years. DesignLine is their latest addition to the range, which was launched at the start of the year.

Jason explained why they felt the need to develop the product. "With Finish Line, which was our standard thin finishing product, we were finding that for some jobs it wasn't as easy to get the absolute best cut possible. There was a little bit of a difference between a tape and the plotter. With DesignLine we guarantee that it will be the same quality as a knife or plotter. This is why we developed this tape."

Jason continues, "Edges have to be heated with all wrapping films to seal them. After heating the edges the cut just gets even better." From our testing I can see that this does indeed make a good cut better. I have also found that having the filament in the middle and the fact that is very conformable and soft does allow it to curve both ways very easily. 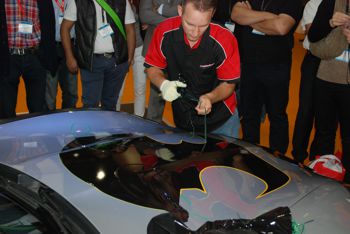 The Benefits of using the Knifeless tapes:

1) There are no knives on the bodywork, mitigating the risk of damage.
2) When using a knife on bodywork, blades can be flexible and wobble off your intended line. This doesn't happen with knifeless tapes.
3) It is easier to cut in one go. With a blade I tend to need to stop and start several times as you physically stop to move your body.
4) It can save a lot of money, as you won't make mistakes like you can with a blade. It's fairly fast too, reducing labour costs.

When it comes to comparing the DesignLine with the Finish Line, there are some notable differences:

• It is made to stretch and can be pre-stretched for even tighter curves.
• Filament can be pulled at any angle, and from looking at it, I would say the filament is thinner which may be what allows the finer cut.
• You can break through the tape with your hands so no knife is required.
• Money back guarantee on the cut produced. 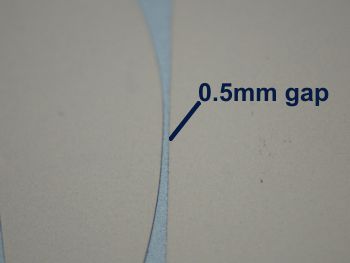 From testing I would say that this is because the filament is not as strong, which is probably why they say it is not suitable for doing more than one layer at a time. Jason assured me that "DesignLine can most definitely cut printed vinyl with laminate."

After having shown Jason the image of the cuts that are published on these pages, he did point out a few things. "Most vinyl manufacturers advise that you only cut half way through the vinyl (scoring) if you are using a blade, whether it's on a vehicle or any surface really, so you are still tearing the vinyl slightly when pulling it away." Based on this I think that they may have a point, and this could cause a less than perfect cut with a blade. In the cuts that I did, I had a strip of protective film underneath which allowed me to cut probably all the way through (or very close to it), which would give a better cut. I would then pull the underneath layer away and then stick down the main layer again by hand, which obviously adds a time element to it but nevertheless lives up to the promise of providing "knife-like cuts guaranteed."

Overall I found this to be a very useful product for creating special artistic effects.

For more information visit: www.knifelesstechsystems.com. Products can be purchased from Spandex, SignGeer and William Smith.