In this release, ArtCAM Express has seen a number of improvements to its line (vector) drawing & editing features. As sign-makers often work with imported customer artwork, ArtCAM Express now includes a number of quick select options, such as selecting all vectors of a specific size or thickness to help identify and prepare these vector designs for machining. These vectors can then be deleted, moved to another vector layer with the Vector Tools Module or edited, for example.

In addition, the 'Vector Doctor' tool has been enhanced so that designers can quickly find and fix problematic areas of 2D artwork. The tool can now locate duplicate vectors or vectors longer, shorter, larger or smaller than specified values, which could cause problems when machining, for example parts of a 2D design that are too small for the CNC cutting tool. 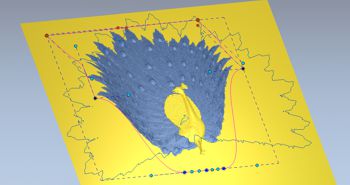 his designing process can all be speedup by ArtCAM's new ability to snap to anything such as, anywhere on a vector including intersections, guidelines and even key points on the 3D model. Furthermore, if users wish to machine around their vector design, they can quite simply select the required vector and drag and drop to the location that they would like to offset it or alternatively specify the exact positioning and distance required.
ArtCAM Insignia 2013, the mid-range CADCAM product includes all this and more. This introductory 3D modelling package covers an array of 2D & 3D design and machining functions. One of the latest 2D advancements is its ability to distort 2D artwork in real-time. This means that users can see their selected text for example being distorted and altered as they move their cursor. Designers can now also use a new 'Fluting Toolpath' to transform their 2D artwork into decoratively machined pieces. Distinctive tapered finishes can be machined to create unique text, patterns and cuts. ArtCAM Insignia can also add or remove material to create a draft angle on any piece of relief artwork. This is great if you wish to create the mould for your vacuum formed signs.

Last but not least is Delcam's significantly enhanced advanced artistic CADCAM package, ArtCAM Pro 2013. ArtCAM Pro users, in addition to being about to created tapered designs with the Fluted Toolpath available in Insignia also have the option to machine fluted weaves. These can create some stunning borders or textured sign backgrounds.

ArtCAM Pro is also host to powerful interactive distortion modelling. To demonstrate Delcam took the iconic release image for ArtCAM 2012, the peacock, and using the new relief distortion functionality selected the bird's outspread feathers and distorted them in real-time, followed by the feathers on the body to create a completely new piece of relief artwork.

To find out more about ArtCAM 2013 go to: www.artcam.com.