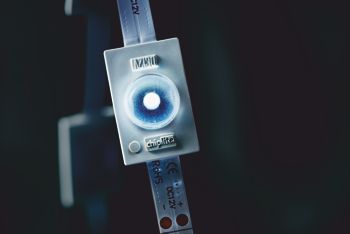 Germany-based Majert has added the latest CL-FLEXO model to the Chiplite CL Series of LED modules. It follows expansion of the company’s third-generation CL-X Series and provides a “radically enhanced” illumination capability for lightbox installations.

A key design feature of the CL-FLEXO module is the specially developed 170-degree optical lens that enables shadow-free illumination of lightboxes with a depth of 40mm. By using a flexible circuit board rather than traditional wiring, there is no show-through of cables to the illuminated sign face. At a depth of 40mm, it is possible to create an 80 x 80mm grid that requires only 144 modules per square metre. The distance between each module on the circuit board is set at 80mm for ease of installation.

The size of each CL-FLEXO LED module is 35mm (depth) x 23mm (width), with the modules supplied in 4.8 metre-long rolls.
Like with all Chiplite LED modules, the CL-FLEXO model carries RoHS (Restriction of Hazardous Substances) certification and a CE rating in accordance with BS EN 55015. It is also IP65 rated to BS EN 60529 that relates to the sealing effectiveness of electrical enclosures against the ingress of dirt and water and other contaminants.
Chiplite LED modules provide a wide choice of luminous flux, power consumption and optical efficiencies to accommodate virtually any lightbox or illuminated sign tray and lettering requirement, says the company.